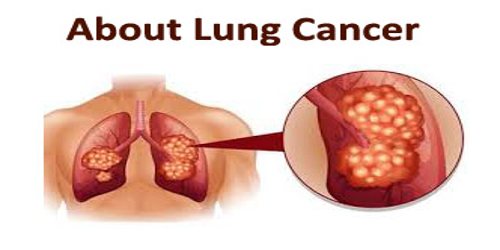 Lung cancer is one of the most common forms of cancer. It is also known as lung carcinoma, is a malignant lung tumor characterized by uncontrolled cell growth in tissues of the lung. The lung is a very common site for metastasis from malignant tumors in other parts of the body. Most cancers that start in the lung, known as primary lung cancers, are carcinomas. The two main types are small-cell lung carcinoma (SCLC) and non-small-cell lung carcinoma (NSCLC). The most common symptoms are coughing (including coughing up blood), weight loss, shortness of breath, and chest pains. The majority of lung cancer is diagnosed at a relatively late stage; only 10% of all lung cancer patients are ultimately cured. Eight out of 10 lung cancers are due to tobacco smoke. Lung cancers can arise in any part of the lung, but 90%-95% of cancers of the lung are thought to arise from the epithelial cells, the cells lining the larger and smaller airways (bronchi and bronchioles); for this reason, lung cancers are sometimes called bronchogenic cancers or bronchogenic carcinomas. Cancers also can arise from the pleura, also called mesotheliomas or rarely from supporting tissues within the lungs, for example, the blood vessels.

Avoidance of risk factors, including smoking and air pollution, is the primary method of prevention. Treatment and long-term outcomes depend on the type of cancer, the stage (degree of spread), and the person’s overall health. Most cases are not curable. Common treatments include surgery, chemotherapy, and radiotherapy. NSCLC is sometimes treated with surgery, whereas SCLC usually responds better to chemotherapy and radiotherapy. Lung cancer mainly affects older people. It’s rare in people younger than 40, and the rates of lung cancer rise sharply with age. Lung cancer is most commonly diagnosed in people aged 70-74. Although people who have never smoked can develop lung cancer, smoking is the main cause (accounting for over 85% of cases). Symptoms of lung cancer that may occur elsewhere in the body:

Diagnosis and Treatment of Lung Cancer Smoking prevention and smoking cessation are effective ways of preventing the development of lung cancer. The long-term use of supplemental vitamin A, vitamin C, vitamin D or vitamin E does not reduce the risk of lung cancer. Some studies suggest that people who eat diets with a higher proportion of vegetables and fruit tend to have a lower risk, but this may be due to confounding with the lower risk actually due to the association of a high fruit/vegetables diet with less smoking.