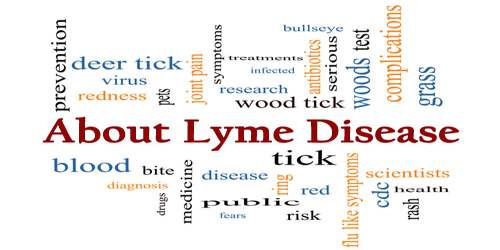 Lyme disease is a disease caused by the bacterial spirochete Borrelia burgdorferi, transmitted by deer ticks and characterized initially by a bull’s-eye-shaped rash followed by flu-like symptoms such as fever, joint pain, and headache. If untreated, it can result in chronic arthritis and neurologic or cardiac dysfunction. It is named after Lyme, Connecticut, where it was first reported. Symptoms can occur anywhere from 3 to 30 days after the bite, and symptoms can be wide-ranging, depending on the stage of the infection. Lyme disease is diagnosed based on symptoms, physical findings (e.g., rash), and the possibility of exposure to infected ticks.  Laboratory testing is helpful if used correctly and performed with validated methods. Most cases of Lyme disease can be treated successfully with a few weeks of antibiotics. Treatment is usually for two or three weeks. Some people develop a fever and muscle and joint pains from treatment which may last for one or two days. In those who develop persistent symptoms, long-term antibiotic therapy has not been found to be useful. Lyme disease is classified as a zoonosis, as it is transmitted to humans from a natural reservoir among small mammals and birds by ticks that feed on both sets of hosts. Most infections are caused by ticks in the nymphal stage because they are very small and thus may feed for long periods of time undetected. Larval ticks are very rarely infected. Lyme disease can produce a wide range of symptoms, depending on the stage of infection. These include fever, rash, facial paralysis, and arthritis.

Early Signs and Symptoms (3 to 30 days after tick bite)

Later Signs and Symptoms (days to months after tick bite)

In early Lyme disease, doctors can sometimes make a diagnosis simply by finding the classic red rash (described above), particularly in people who have recently been in regions in which Lyme disease is common. Blood tests for antibodies to Lyme bacteria are generally not necessary or helpful in early-stage disease, but it can help in diagnosis in later stages. Patients treated with appropriate antibiotics in the early stages of Lyme disease usually recover rapidly and completely. Antibiotics commonly used for oral treatment include doxycycline, amoxicillin, or cefuroxime axetil. Patients with certain neurological or cardiac forms of illness may require intravenous treatment with drugs such as ceftriaxone or penicillin.

About 30,000 cases of Lyme disease are reported to the CDC each year, the agency says, but that doesn’t reflect every case that’s diagnosed. The CDC estimates about 329,000 cases of Lyme disease occur each year. Protective clothing includes a hat, long-sleeved shirt, and long pants tucked into socks or boots. Light-colored clothing makes the tick more easily visible before it attaches itself. People should use special care in handling and be allowing outdoor pets inside homes because they can bring ticks into the house. People who work in areas with woods, bushes, leaf litter, and tall grass are at risk of becoming infected with Lyme at work. Employers can reduce the risk for employees by providing education on Lyme transmission and infection risks, and about how to check themselves for ticks on the groin, armpits, and hair. Work clothing used in risky areas should be washed in hot water and dried in a hot dryer to kill any ticks.