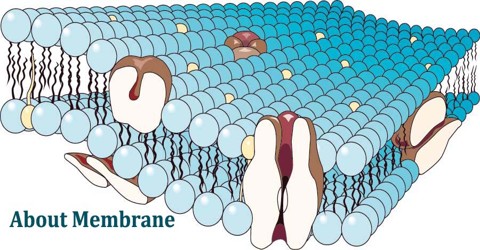 A Membrane is a thin sheet or layer of pliable tissue, serving as a covering or envelope of a part, as the lining of a cavity, as a partition or septum, or as a connection of two structures. Membranes are thin and flexible, but usually still strong enough to protect what’s inside or underneath them. Biological membranes include cell membranes outer coverings of cells or organelles that allow passage of certain constituents; nuclear membranes, which cover a cell nucleus; and tissue membranes, such as mucosae and serosae. Synthetic membranes are made by humans for use in laboratories and industry, such as chemical plants. The influent of an artificial membrane is known as the feed-stream, the liquid that passes through the membrane is known as the permeate, and the liquid containing the retained constituents is the retentate or concentrate. Filtration membranes can be classified into 4 main categories: Microfiltration, Ultrafiltration, Nanofiltration, and Reverse Osmosis. Microfiltration is commonly used as a pretreatment or clarification step prior to other membrane processes for the removal of fats and large macromolecules. Ultrafiltration allows for the removal of all bacteria, as well as some viruses, and is commonly used throughout the dairy and food industry for the concentration of proteins and juices. Nanofiltration and reverse osmosis membranes are a type of thin film composite, and are commonly used in desalination applications due to their ability to separate monovalent and divalent salts.

Membranes are flat sheets of tissue that cover or line parts of the body and are typically composed of epithelial cells and connective tissue. Epithelial cells cover the inner and outer layers of surfaces and form glands that secrete fluids. Connective tissue is the most abundant type of tissue in the body; it binds and supports the structures of the body. There are five types of membranes found within the body. Mucous Membrane: Mucous membranes, also called mucosa, line the inside of cavities that open directly to the exterior environment. Mucous membranes line the gastrointestinal tract, respiratory tract, reproductive tracts and the urinary tract. This type of membrane is composed of an epithelial cell layer and an underlying connective tissue layer. The epithelial layer is an important defense mechanism that prevents the entry of pathogens and microbes into the body. The cells are tightly packed together, so fluid cannot leak through the epithelial layer. Specialized cells secrete mucous to keep the membrane moist.

Serous Membrane: Serous membranes, or serosa, line cavities of the body that do not open directly to the external environment; it also covers the organs within the cavities. Serous membranes are made of two layers: a layer to line a cavity, called the parietal membrane, and a layer to cover an organ, called the visceral layer. Serous membranes secrete a lubricant called serous fluid that allows the organs to glide against other structures without causing friction, according to “Principles of Human Anatomy”.

Cutaneous Membrane: The cutaneous membrane, also known as the skin, covers the entire body. It is composed of many layers of epithelial cells to protect the body from invading microbes or pathogens, in addition to light, heat and injury. The skin is the largest organ of the body that also stores fat, vitamin D and water and houses the sensory receptors for touch and pain. It regulates body temperature by secreting sweat to dissipate heat, according to UMMC. Microfiltration (MF): Microfiltration removes particles higher than 0,08-2 µm and operates within a range of 7-100 kPa. Microfiltration is used to remove residual suspended solids (SS), to remove bacteria in order to condition the water for effective disinfection and as a pre-treatment step for reverse osmosis.

Nanofiltration (NF): Nanofiltration is also known as “loose” RO and can reject particles smaller than 0,001 µm. Nanofiltration is used for the removal of selected dissolved constituents from wastewater. NF is primarily developed as a membrane softening process which offers an alternative to chemical softening.