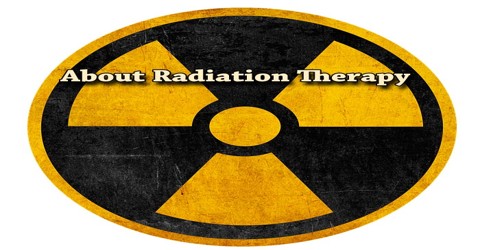 Radiation Therapy, also known as radiotherapy, is a treatment used against cancer and, less commonly, thyroid disease, blood disorders and noncancerous growths. Radiation therapy may be curative in a number of types of cancer if they are localized to one area of the body. It may also be used as part of adjuvant therapy, to prevent tumor recurrence after surgery to remove a primary malignant tumor. It is synergistic with chemotherapy, and has been used before, during, and after chemotherapy in susceptible cancers. Radiation Therapy uses high-energy particles or waves, such as x-rays, gamma rays, electron beams, or protons, to destroy or damage cancer cells. Other names for radiation therapy are radiotherapy, irradiation, or x-ray therapy.

Radiation can be given alone or used with other treatments, such as surgery or chemotherapy. In fact, certain drugs are known to be radiosensitizers (RAY-dee-oh-SENS-it-tie-zers). This means they can actually make the cancer cells more sensitive to radiation, which helps the radiation to better kill cancer cells.

There are two forms of radiation therapy:

Radiation Therapy is commonly applied to the cancerous tumor because of its ability to control cell growth. Ionizing radiation works by damaging the DNA of cancerous tissue leading to cellular death. To spare normal tissues, such as skin or organs which radiation must pass through to treat the tumor, shaped radiation beams are aimed from several angles of exposure to intersect at the tumor, providing a much larger absorbed dose there than in the surrounding, healthy tissue. About 60 percent of cancer patients are treated with radiation at some time during their course of treatment.

Radiation Therapy is the use of high-energy radiation to treat cancer. A radiation oncologist may use radiation to cure cancer or to relieve a cancer patient’s pain or alleviate other symptoms due to the cancer.

Radiation Therapy works because the radiation destroys the cancer cells’ ability to reproduce, and the body naturally gets rid of these cells. Radiation affects cancer cells by damaging their DNA, so that the cancer cells can no longer divide and grow. Radiation is most effective at killing cells that are actively dividing. Cancer cells are more vulnerable to radiation for two key reasons: they divide more rapidly than normal cells, and they do not repair this damage as effectively as normal cells.

It is important to distinguish the radiosensitivity of a particular tumor, which to some extent is a laboratory measure, from the radiation “curability” of a cancer in actual clinical practice. For example, leukemias are not generally curable with radiation therapy, because they are disseminated through the body. Lymphoma may be radically curable if it is localised to one area of the body. Similarly, many of the common, moderately radioresponsive tumors are routinely treated with curative doses of radiation therapy if they are at an early stage. For example: non-melanoma skin cancer, head and neck cancer, breast cancer, non-small cell lung cancer, cervical cancer, anal cancer, prostate cancer. Metastatic cancers are generally incurable with radiation therapy because it is not possible to treat the whole body. The effect of radiotherapy on control of cancer has been shown to be limited to the first five years after surgery, particularly for breast cancer. The difference between breast cancer recurrence in patients who receive radiotherapy vs. those who don’t is seen mostly in the first 2–3 years and no difference is seen after 5 years.

Side Effects of Radiation Therapy