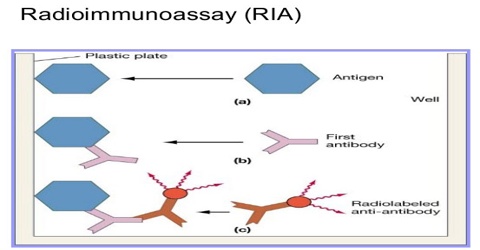 RIA or Radioimmunoassay is an in vitro assay that measures the presence of an antigen with very high sensitivity. Basically any biological substance for which a specific antibody exists can be measured, even in minute concentrations. RIA has been the first immunoassay technique developed to analyze nanomolar and picomolar concentrations of hormones in biological fluids. This method was developed by Rosalyn Sussman Yalow at the Veterans Administration Hospital in the Bronx, New York. This revolutionary development earned Dr. Yalow the Nobel Prize for Medicine in 1977, the second woman ever to win it. In her acceptance speech, Dr. Yalow said, “The world cannot afford the loss of the talents of half its people if we are to solve the many problems which beset us.” That means that as the concentration of unlabeled antigen is increased, more of it binds to the antibody, displacing the labeled variant. The bound antigens are then separated from the unbound ones, and the radioactivity of the free antigens remaining in the supernatant is measured. A binding curve can be generated using a known standard, which allows the amount of antigens in the patient’s serum to be derived.

Radioimmunoassay is an old assay technique but it is still a widely used assay and continues to offer distinct advantages in terms of simplicity and sensitivity.

Yalow and Berson developed the first radioisotopic technique to study blood volume and iodine metabolism. They later adapted the method to study how the body uses hormones, particularly insulin, which regulates sugar levels in the blood. The researchers proved that Type II (adult onset) diabetes is caused by the inefficient use of insulin. Previously, it was thought that diabetes was caused only by a lack of insulin.

In 1959 Yalow and Berson perfected their measurement technique and named it radioimmunoassay (RIA). RIA is extremely sensitive. It can measure one trillionth of a gram of material per milliliter of blood. Because of the small sample required for measurement, RIA quickly became a standard laboratory tool. As an example of how this technique works, let’s apply it to insulin. To measure insulin, the first step is to mix known amounts of radioisotope-tagged insulin and antibodies. These combine chemically. Next, a small amount of the patient’s blood is added. The insulin contained in the blood displaces some of the tagged insulin. The free-tagged insulin is then measured with isotope detectors and the patient’s insulin level is calculated.

Radioimmunoassay is based upon the competition between labeled and unlabeled antigen for specific antibody sites, forming antigen-antibody complexes. This reaction is described by the expression see journal for formula. At equilibirum, the radioactive complex (bound) is separated from the radioactive antigen (free). The B/F ratio is dependent upon the amount of nonradioactive antigen. Antigen concentration in unknown samples is determined by comparing the B/F ratio to the B/F ratios obtained by incubating varying amounts of known nonradioactive antigen with the same amount of antibody as in the unknown sample under similar assay conditions. Sensitivity of the order of 10-12 moles/liter may be achieved through the preparation and use of a labeled antigen of high specific activity and the production and selection of antisera with appropriately high affinity constants. Specificity is dependent upon the ability of the antiserum to recognize subtle structural features of the antigen molecule. The ability to conveniently assay large numbers of samples with good precision has led to the application of this technique to quantitate substances (such as steroids) already measurable but by more cumbersome methods.