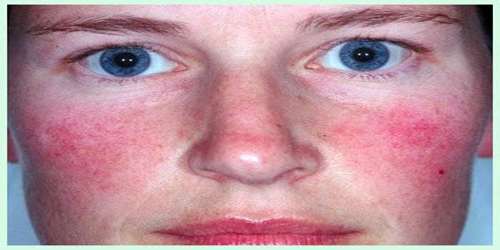 Rosacea is a chronic dermatitis of the face, especially of the nose and cheeks, characterized by a red or rosy coloration with deep-seated papules and pustules and caused by dilation of capillaries. It is also called acne erythematosa, acne rosacea. Many have observed that it typically begins any time after age 30 as a redness on the cheeks, nose, chin or forehead that may come and go. In some cases, rosacea may also occur on the neck, chest, scalp or ears. The condition was described in the Canterbury Tales in the 1300s AD and possibly as early as 200s BC by Theocritus. The cause of Rosacea is unknown. Risk factors are believed to include a family history of the condition. Factors that may potentially worsen the condition include heat, exercise, sunlight, cold, spicy food, alcohol, menopause, psychological stress, or steroid cream on the face. Diagnosis is based on symptoms.

Although rosacea can affect all segments of the population, individuals with fair skin who tend to flush or blush easily are believed to be at greatest risk. The disease is more frequently diagnosed in women, but more severe symptoms tend to be seen in men perhaps because they often delay seeking medical help until the disorder reaches advanced stages.

The exact cause of rosacea is still unknown. The basic process seems to involve dilation of the small blood vessels of the face. Although they’re not thought to be direct causes of the condition, several triggers have been identified that may make rosacea worse. Typical signs and symptoms of rosacea include The symptoms and signs of rosacea tend to come and go. The skin may be clear for weeks, months, or years and then erupt again. Rosacea tends to evolve in stages and typically causes inflammation of the skin of the face, particularly the forehead, cheeks, nose, and chin.

In glandular rosacea, men with thick sebaceous skin predominate, a disease in which the papules are edematous, the pustules often 0.5 to 1.0 cm in size, with nodulocystic lesions often present.

Diagnosis and Treatment of Rosacea

Rosacea is usually diagnosed based on the typical red or blushed facial skin appearance and symptoms of easy facial blushing and flushing. Rosacea is largely underdiagnosed, and most people with rosacea do not know they have the skin condition. Many people may not associate their intermittent flushing symptoms with a medical condition. The facial redness in rosacea may be transient and come and go very quickly. Treating rosacea varies depending on severity and subtypes. A subtype-directed approach to treating rosacea patients is recommended to dermatologists. Mild cases are often not treated at all, or are simply covered up with normal cosmetics. Long-term treatment is usually necessary, although there may be periods when your symptoms improve and you can stop treatment temporarily.

For most people, treatment involves a combination of self-help measures and medication, such as:

In some cases procedures such as laser and intense pulsed light (IPL) treatment may be helpful. These involve beams of light being aimed at the visible blood vessels in the skin to shrink them and make them less visible.