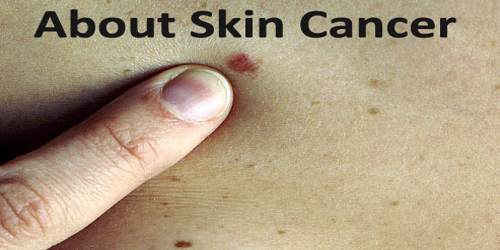 Skin cancer is a common and locally destructive cancerous (malignant) growth of the skin. It originates from the cells that line up along the membrane that separates the superficial layer of skin from the deeper layers. It occurs when the body does not repair damage to the DNA inside skin cells, allowing the cells to divide and grow uncontrollably. Skin cell damage may be caused by a variety of factors, including genetics and skin type. But most cases of skin cancer are caused by overexposure to ultraviolet (UV) light produced by the sun. Skin cancer may appear as a dark spot, lesion, a wound that does not heal or a bump on the skin. Most skin cancers are caused by exposure to the sun. This may be long-term exposure or short periods of overexposure. This is because ultraviolet (UV) light from the sun damages the DNA (genetic material) in our skin cells. Some genetic syndromes including congenital melanocytic nevi syndrome which is characterized by the presence of nevi (birthmarks or moles) of varying size which are either present at birth, or appear within 6 months of birth. Nevi larger than 20 mm (3/4″) in size are at higher risk for becoming cancerous. The use of many immunosuppressive medications increases the risk of skin cancer. Cyclosporin A, a calcineurin inhibitor for example increases the risk approximately 200 times, and azathioprine about 60 times.

There are a variety of different skin cancer symptoms. These include changes in the skin that do not heal, ulcering in the skin, discolored skin, and changes in existing moles, such as jagged edges to the mole and enlargement of the mole. Signs and symptoms of basal cell carcinomas include:

Signs and symptoms of squamous cell carcinomas include:

Melanoma: Most melanoma consists of various colours from shades of brown to black. A small number of melanoma are pink, red or fleshy in colour; these are called amelanotic melanoma and tend to be more aggressive. Warning signs of malignant melanoma include change in the size, shape, color or elevation of a mole. Other signs are the appearance of a new mole during adulthood or pain, itching, ulceration, redness around the site, or bleeding at the site. An often-used mnemonic is “ABCDE”, where A is for “asymmetrical”, B for “borders” (irregular: “Coast of Maine sign”), C for “color” (variegated), D for “diameter” (larger than 6 mm—the size of a pencil eraser) and E for “evolving.”

Lymphoma of the skin: Lymphoma, which is cancer of the lymphatic system, may form in a variety of locations in the body, including the spleen, lymph nodes, thymus and skin. This cancer may appear as red or purple patches, moles or pimples on the skin that may itch or ulcerate. Other symptoms may include fatigue and weight loss.

A skin examination by a dermatologist is the way to get a definitive diagnosis of skin cancer. In many cases, the appearance alone is sufficient to make the diagnosis.

A skin biopsy is usually used to confirm a suspicion of skin cancer. This is performed by numbing the area under the tumor with a local anesthetic such as lidocaine. A small portion of the tumor is sliced away and sent for examination by a pathologist, who looks at the tissue under a microscope and renders a diagnosis based on the characteristics of the tumor. Many skin cancers can be prevented by avoiding triggers that cause tumors to develop. Prevention strategies include protection from the sun by the use of sunscreens, protective clothing, and avoidance of the sun during the peak hours of 9 AM to 3 PM. Parents should ensure children are protected from the sun. Do not use tanning beds, which are a major cause of excess ultraviolet light exposure and a significant risk factor for skin cancer. The American Academy of Dermatology (AAD) has noted a dramatic rise in the numbers and cost of skin cancer. Furthermore, there has been an increase in the total number of skin cancers and that new breakthrough treatments for melanoma, although expensive, comprise only a small portion of the total cost of skin cancer treatment. Most skin cancers are treated cost efficiently by dermatologists in an office setting.