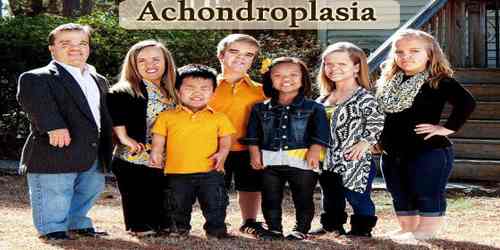 Achondroplasia is a skeletal disorder, characterized by failure of normal conversion of cartilage into bone that begins during fetal life and results in dwarfism. The word achondroplasia literally means “without cartilage formation.” Cartilage is a tough but flexible tissue that makes up much of the skeleton during early development. It occurs as a sporadic mutation in about 80% of cases (associated with advanced paternal age) or it may be inherited as an autosomal dominant genetic disorder. The disorder occurs in approximately 1 in 25,000 live births, according to Columbia University Medical Center (CUMC). It’s equally common in males and females. It is caused by mutation in the fibroblast growth factor receptor-3 gene (FGFR3), which is located on chromosome 4 in chromosome band 4p16.3. Aside from short arms and legs, the fingers are short and the ring and middle fingers diverge giving the hand a trident (three- pronged) appearance. There is a typically large head with prominence of the forehead (frontal bossing), underdevelopment (hypoplasia) of the midface with cheekbones that lack prominence, and a low nasal bridge with narrow nasal passages. The brain is normal and intelligence is entirely normal in achondroplasia. However, the complications of achondroplasia can impinge on the brain and the spinal cord.

People with achondroplasia have short stature, with an average adult height of 131 centimeters (52 inches) for males and 123 centimeters (48 inches) for females. Achondroplastic adults are known to be as short as 62.8 cm (24.7 in). Achondroplasia can be diagnosed before birth by molecular means. The limited number of changes in the FGF3 gene responsible for achondroplasia and the ease with which they can be detected provide the basis for a simple method for prenatal diagnosis. Achondroplasia is caused by a mutation in fibroblast growth factor receptor 3 (FGFR3). The FGFR3 gene instructs our body to make a protein necessary for bone growth and maintenance. Mutations in the FGFR3 gene cause the protein to be overactive. This interferes with normal skeletal development. The effect is genetically dominant, with one mutant copy of the FGFR3 gene being sufficient to cause achondroplasia, while two copies of the mutant gene are invariably fatal (recessive lethal) before or shortly after birth, which is also known as a lethal allele. A person with achondroplasia thus has a 50% chance of passing dwarfism to each of their offspring. People with achondroplasia can be born to parents that do not have the condition due to spontaneous mutation. Achondroplasia is similar to another skeletal disorder called hypochondroplasia, but the features of achondroplasia tend to be more severe. People with achondroplasia generally have normal intelligence levels. Their symptoms are physical, not mental.

Diagnosis and Treatments of Achondroplasia

Achondroplasia is generally diagnosed by bone measurement during physical examination or after X-ray. Prenatal diagnosis is recommended if one or both of the parents are already affected. In the majority of cases, achondroplasia occurs spontaneously through mutations in the sperm or egg. The risk of death in infancy is increased due to the likelihood of compression of the spinal cord with or without upper airway obstruction. Achondroplasia is one of 19 congenital conditions with similar presentations, such as osteogenesis imperfecta, multiple epiphyseal dysplasia tarda, achondrogenesis, osteopetrosis, and thanatophoric dysplasia.