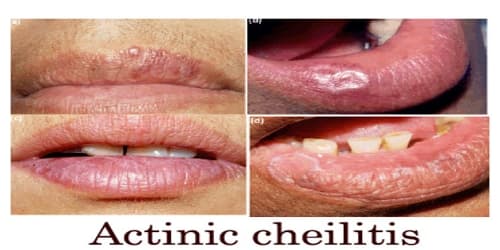 Definition: Actinic cheilitis, sometimes known as “farmer’s lip” or “sailor’s lip,” is a precancerous condition related to cumulative lifetime sun exposure. Essentially it is a burn and a variant of actinic keratosis which occurs on the lip. It is a premalignant condition, as it can develop into squamous cell carcinoma (a type of mouth cancer).

The condition itself is not considered a serious health concern, but it increases the risk of skin cancer.

Most people with actinic cheilitis develop similar symptoms. About 90 percent of cases involve the lower lip, although the condition can also develop on the upper lip.

Actinic cheilitis (AC) most often appears in people over 40 and is more common in men than women. People who spend a lot of time in the sun are most likely to develop AC.

Causes, Sign, and Symptom of Actinic Cheilitis: Actinic Cheilitis (AC) is caused by long-term sun exposure. For most people, it takes years of intense sun exposure to cause AC. AC is significantly more common in men, the elderly, and fair-skinned individuals. There is also a strong association with tobacco use. In more advanced AC, the patches might look scaly and feel like sandpaper. People might also notice that the line between their lower lip and skin becomes less clear. These discolored or scaly patches of skin are almost always painless. Persistent redness, scaliness, and chapping are among the symptoms noted. Erosions and cracks (fissures) may be present as well. Diagnosis, Treatment, and Prevention of Actinic Cheilitis: Actinic cheilitis will require a skin biopsy. This procedure involves removing cells from the affected area for microscopic examination.

Characteristics commonly used to diagnose or confirm the condition include:

There are several ways for a doctor to surgically remove AC. One is cryotherapy, in which the doctor freezes the AC patch by coating it in liquid nitrogen. This causes the affected skin to blister and peel off, and allow new skin to form. Cryotherapy is the most common treatment for AC.

AC can also be removed through electrosurgery. In this procedure, the doctor destroys the AC tissue using an electric current. Electrosurgery requires a local anesthetic.

Medications that go directly on the skin, such as fluorouracil (Efudex, Carac), treat AC by killing the cells in the area the medication is applied to without affecting normal skin. These medications are usually prescribed for two to three weeks and can have side effects such as pain, burning, and swelling.

To prevent AC from developing, protective measures could be undertaken such as avoiding mid-day sun, or use of a broad-brimmed hat, lip balm with anti UVA and UVB ingredients (e.g. para-aminobenzoic acid), or sun blocking agents (e.g. zinc oxide, titanium oxide) prior to sun exposure.