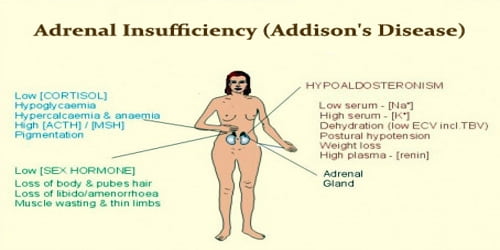 Adrenal Insufficiency or Addison’s Disease occurs when the adrenal glands do not produce enough of the hormone cortisol and in some cases, the hormone aldosterone. For this reason, the disease is sometimes called chronic adrenal insufficiency, or hypocortisolism.

The disease is characterized by weight loss, muscle weakness, fatigue, low blood pressure, and sometimes darkening of the skin in both exposed and non-exposed parts of the body.

Treatment for Addison’s disease involves taking hormones to replace the insufficient amounts being made by our adrenal glands, in order to mimic the beneficial effects produced by our naturally made hormones.

Cortisol is normally produced by the adrenal glands, located just above the kidneys. It belongs to a class of hormones called glucocorticoids, which affect almost every organ and tissue in the body. Cortisol’s most important job is to help the body respond to stress. Among its other vital tasks, cortisol:

Aldosterone keeps the sodium and potassium in our blood balanced, which helps control our blood pressure and the balance of fluids in our body. Causes of adrenal insufficiency can be categorized by the mechanism through which they cause the adrenal glands to produce insufficient cortisol. These are adrenal dysgenesis (the gland has not formed adequately during development), impaired steroidogenesis (the gland is present but is biochemically unable to produce cortisol) or adrenal destruction (disease processes leading to glandular damage)

There are three major types of adrenal insufficiency.

Primary Adrenal Insufficiency – Primary adrenal insufficiency is also called Addison’s disease. It is due to impairment of the adrenal glands. When people have this type, their adrenal glands are damaged and can’t make the cortisol they need. They also might not make enough aldosterone.

Other causes of adrenal gland failure may include:

Secondary adrenal insufficiency – This form of Addisons disease can be traced to a lack of ACTH, which causes a drop in the adrenal glands production of cortisol but not aldosterone. A temporary form of secondary adrenal insufficiency may occur when a person who has been receiving a glucocorticoid hormone such as prednisone for a long time abruptly stops or interrupts taking the medication.

Another more common cause of secondary adrenal insufficiency occurs when people who take corticosteroids for treatment of chronic conditions, such as asthma or arthritis, abruptly stop taking the corticosteroids.

Tertiary adrenal insufficiency is due to hypothalamic disease and a decrease in the release of corticotropin-releasing hormone (CRH). Causes can include brain tumors and sudden withdrawal from long-term exogenous steroid use (which is the most common cause overall). Diagnosis and Treatment of Adrenal Insufficiency: Adrenal insufficiency can be difficult to diagnose. Tests that measure the levels of cortisol and aldosterone are used to make a definite diagnosis and include the following:

Once a diagnosis of primary adrenal insufficiency has been made, x-ray exams of the abdomen may be taken to see if the adrenals have any signs of calcium deposits. Calcium deposits may indicate TB. A tuberculin skin test also may be used.

If secondary adrenal insufficiency is the cause, doctors may use different imaging tools to reveal the size and shape of the pituitary gland. The most common is the CT scan, which produces a series of x-ray pictures giving a cross-sectional image of a body part. The function of the pituitary and its ability to produce other hormones also are tested.

All treatment for Addison’s disease involves hormone replacement therapy to correct the levels of steroid hormones our body isn’t producing. Some options for treatment include:

People take these medicines regularly to treat diseases such as rheumatoid arthritis, ulcerative colitis, or asthma. The drugs act like cortisol in your body. When their body detects them, it senses that cortisol is present, so their pituitary gland doesn’t make as much ACTH to prompt their adrenal glands to make more.

Women with primary adrenal insufficiency who become pregnant are treated with standard replacement therapy. If nausea and vomiting in early pregnancy interfere with oral medication, injections of the hormone may be necessary.