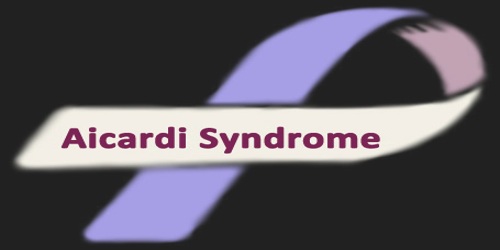 Aicardi syndrome is a rare genetic disorder that interferes with the formation of the corpus callosum, which is the structure that connects the two sides of the brain. It may be associated with other brain defects such as microcephaly (small brain) or porencephalic cysts (cerebrospinal fluid-filled cavities or gaps in the brain). Features associated with Aicardi syndrome include cleft lip and/or palate, fatty tumors (lipomas) of the scalp, blood vessel malformations (cavernous hemangiomas), rib and vertebral defects and scoliosis (curved spine). There is no cure for Aicardi syndrome. Nor is there a standard course of treatment. Treatment is purely symptomatic. It generally involves management of seizures and programs for the mental retardation.

Aicardi syndrome most often appears in females as well as in boys with Klinefelter’s syndrome, a condition in which a male has an extra X chromosome. For these reasons, researchers believe the disorder is caused by a defect on the X chromosome. In the few cases where males have been affected, they have carried an extra X chromosome (XXY), a condition knows of as Klinefelter’s syndrome. The mutation occurs sporadically and noone with Aicardi syndrome is known to have passed the disorder onto their offspring.

Aicardi syndrome was first recognized by a French neurologist called Jean Aicardi in 1965. In 1998, a review article by Aicardi describing the syndrome was published in the journal International Pediatrics. Estimates suggest that the worldwide prevalence of Aicardi Syndrome is around several thousand with almost 900 such cases identified in the United States. Children are most commonly identified with Aicardi syndrome before the age of five months. A significant number of girls are products of normal births and seem to be developing normally until around the age of three months, when they begin to have infantile spasms. Children may also develop yellowish spots on their eyes. Lesions on the retina, which is the light-sensitive layer of tissue at the back of the eye, cause these spots. Other symptoms of Aicardi syndrome include:

Additional symptoms of Aicardi syndrome include rib and spine abnormalities, such as scoliosis. Children with this disorder may also have unusual facial features, such as a flatter nose, larger ears, or a smaller space between the upper lip and nose. Since Aicardi syndrome can result in poorly developed eyes, children may experience impaired vision or blindness. Diagnosis and treatments of Aicardi Syndrome

Aicardi syndrome is typically characterized by the following triad of features – however, one of the “classic” features being missing does not preclude a diagnosis of Aicardi Syndrome, if other supporting features are present. Some tests that are used to help doctors make a diagnosis include:

Other types of defects of the brain such as microcephaly, polymicrogyria, porencephalic cysts and enlarged cerebral ventricles due to hydrocephalus are also common in Aicardi syndrome. There’s no cure for Aicardi syndrome at this time. The most common method of treatment involves controlling the seizures and spasms brought on by the disorder. There are also programs available to help both children and their parents cope with the intellectual disabilities and developmental delays that usually accompany Aicardi syndrome. Doctors may also be consulted based on the symptoms and severity of the syndrome: