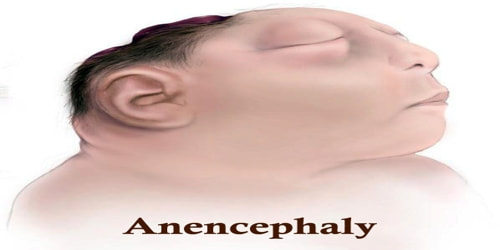 Definition: Anencephaly, also known as “open skull,” is a birth defect in which the major parts of the brain, scalp, and skull of the fetus do not form completely as it is developing in the womb. It is a cephalic disorder that results from a neural tube defect that occurs when the rostral (head) end of the neural tube fails to close, usually between the 23rd and 26th day following conception.

Anencephaly is a type of neural tube defect. It occurs in about 3 of 10,000 pregnancies in the U.S. each year. It is a fatal condition. Infants with anencephaly are stillborn in about 75 percent of cases. The exact number is not known because many of these pregnancies end in miscarriages. This condition most often leads to death in days or weeks. About one in nearly 5,000 babies is born with anencephaly each year, according to the Centers for Disease Control. The exact number is not known because many pregnancies involving neural tube defects end in miscarriage. More female newborns have anencephaly than males, possibly because of a higher rate of spontaneous abortions or stillbirths among male fetuses.

Causes, Sign, and Symptoms of Anencephaly: The cause of anencephaly is generally unknown, which can be frustrating. For some babies, the cause may be related to a gene or chromosome changes. In most cases, the baby’s parents have no family history of anencephaly. One important risk factor related to anencephaly is inadequate intake of folic acid. A lack of this key nutrient may raise your risk of having a baby with other neural tube defects in addition to anencephaly, such as spina bifida. Pregnant women can minimize this risk with folic acid supplements or diet changes.

The National Institute of Neurological Disorders and Stroke (NINDS) describes the presentation of this condition as follows: “A baby born with anencephaly is usually blind, deaf, unaware of its surroundings and unable to feel pain. Although some individuals with anencephaly may be born with a main brain stem, the lack of a functioning cerebrum permanently rules out the possibility of ever gaining awareness of their surroundings. Reflex actions such as breathing and responses to sound or touch may occur.”

Symptoms can occur a bit differently in each child. They can include:

The symptoms of anencephaly can be like other health conditions.

Diagnosis and Treatment of Anencephaly: Anencephaly can often be diagnosed before birth through an ultrasound examination. The maternal serum alpha-fetoprotein (AFP screening) and detailed fetal ultrasound can be useful for screening for neural tube defects such as spina bifida or anencephaly.

Prenatal tests for anencephaly include: There is no treatment or cure for anencephaly. An infant born with the condition should be kept warm and comfortable. If any parts of the scalp are missing, exposed parts of the brain should be covered.

The life expectancy of an infant born with anencephaly is no more than a few days, more likely a few hours.

Methods for preventing anencephaly include the following:

Patient’s healthcare provider may also advise genetic counseling. Pregnant women can discuss with a counselor the risk for a neural tube defect in a future pregnancy.