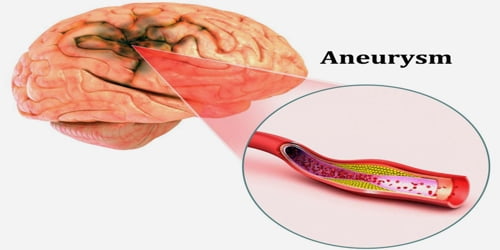 Definition: An aneurysm occurs when an artery’s wall weakens and causes an abnormally large bulge. This bulge can rupture and cause internal bleeding. Although an aneurysm can occur in any part of your body, they’re most common in the:

Aneurysms can also be a nidus (starting point) for clot formation (thrombosis) and embolization. The word is from Greek: ἀνεύρυσμα, aneurysma, “dilation”, from ἀνευρύνειν, aneurynein, “to dilate”. As an aneurysm increases in size, the risk of rupture increases, leading to uncontrolled bleeding.

Aneurysms can occur anywhere, but the most common are:

Causes and Symptoms of Aneurysms: Aneurysms have a variety of causes including high blood pressure and atherosclerosis, trauma, heredity, and abnormal blood flow at the junction where arteries come together.

There are other rare causes of aneurysms. Mycotic aneurysms are caused by infections of the artery wall. Tumours and trauma can also cause aneurysms to form. Drug abuse, especially cocaine, can cause the artery walls to inflame and weaken. Symptoms of an aneurysm vary with each type and location. It’s important to know that aneurysms that occur in the body or brain generally don’t present signs or symptoms until they rupture.

Aneurysms that occur near the surface of the body may show signs of swelling and pain. A large mass may also develop. The symptoms of ruptured aneurysms anywhere in the body can include:

Diagnosis, Treatment and Prevention of Aneurysms: The diagnostic tools used to find arterial damage often depend on the location of the problem. CT scans and ultrasound methods are common tools used to diagnose or find blood vessel irregularities. CT scans use X-rays to examine the inside of the patient’s body. This allows the doctor to see the condition of the blood vessels, as well as any blockages, bulges, and weak spots that may be inside the blood vessels.

The treatment of arterial aneurysms has been limited to either surgical intervention or watchful waiting in combination with control of blood pressure. Some aneurysms may require surgery to reinforce the artery wall with a stent. In cases where an aneurysm has ballooned out the side of the blood vessel, a coiling procedure may be done to close off the area.

Preventing an aneurysm is not always possible, as some are congenital, meaning they are present from birth. However, some lifestyle choices can affect the risk:

Anyone diagnosed with an aneurysm and prescribed a conservative treatment plan can work with a healthcare practitioner to address any risk factors.