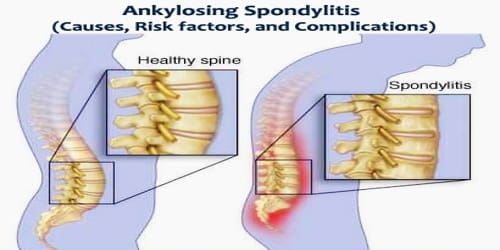 Typically the joints where the spine joins the pelvis are also affected. Occasionally other joints such as the shoulders or hips are involved. Eye and bowel problems may also occur. Back pain is a characteristic symptom of AS, and it often comes and goes. The stiffness of the affected joints generally worsens over time.

Ankylosing spondylitis affects men more often than women. Signs and symptoms typically begin in early adulthood. Diagnosis is typically based on the symptoms with support from medical imaging and blood tests. AS is a type of seronegative spondyloarthropathy, meaning that tests show no presence of rheumatoid factor (RF) antibodies. It is also within a broader category known as axial spondyloarthritis.

There is no cure for ankylosing spondylitis, but treatments can lessen your symptoms and possibly slow progression of the disease. In particular, people who have a gene called HLA-B27 are at greatly increased risk of developing ankylosing spondylitis. However, only some people with the gene develop the condition.

Between 0.1% and 1.8% of people are affected. The disease is most common in Northern European countries and seen least in people of Afro-Caribbean descent. Although the ratio of male to female disease is reportedly 3:1, many rheumatologists believe the number of women with AS is underdiagnosed, as most women tend to experience milder cases of the disease. The majority of people with AS, including 95 percent of people of European descent with the disease, express the HLA-B27 antigen and high levels of immunoglobulin A (IgA) in the blood. If ankylosing spondylitis is left untreated, some complications are possible. These include:

It’s important to seek treatment for lower back pain or chronic joint stiffness. Early treatment can help people avoid these most common complications of ankylosing spondylitis.