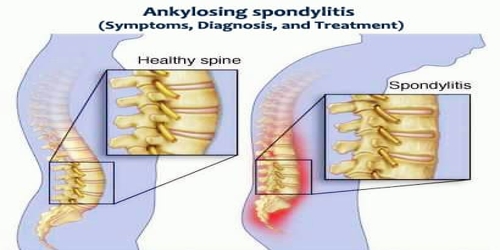 Definition: Ankylosing spondylitis (AS) is a form of arthritis that primarily affects our spine. Typically the joints where the spine joins the pelvis are also affected. Occasionally other joints such as the shoulders or hips are involved. Eye and bowel problems may also occur. Back pain is a characteristic symptom of AS, and it often comes and goes. The stiffness of the affected joints generally worsens over time.

AS back pain is caused by inflammation. It’s chronic, which means it lasts a long time. But treatments can help lessen pain and stiffness.

Between 0.1% and 1.8% of people are affected. Onset is typically in young adults. Males are more often affected than females. Signs and symptoms typically begin in early adulthood. Inflammation also can occur in other parts of our body — most commonly, our eyes.

Ankylosing spondylitis has no known specific cause, though genetic factors seem to be involved. In particular, people who have a gene called HLA-B27 are at greatly increased risk of developing ankylosing spondylitis. However, only some people with the gene develop the condition.

There is no cure for ankylosing spondylitis, but treatments can lessen our symptoms and possibly slow progression of the disease. Treatments may improve symptoms and prevent worsening. This may include medication, exercise, and surgery. Medications used include NSAIDs, steroids, DMARDs such as sulfasalazine, and biologic agents such as infliximab. Signs and Symptoms of Ankylosing spondylitis: The signs and symptoms of ankylosing spondylitis often appear gradually, with peak onset being between 20 and 30 years of age. Initial symptoms are usually a chronic dull pain in the lower back or gluteal region combined with the stiffness of the lower back. Individuals often experience pain and stiffness that awakens them in the early morning hours.

The most common symptom is a back pain in the morning and at night. People may also experience pain in the large joints, such as the hips and shoulders. Other symptoms may include:

About 40% of people with AS will also experience inflammation of the anterior chamber of the eye, causing eye pain, redness, floaters and sensitivity to light. This is thought to be due to the association that both AS and uveitis have with the inheritance of the HLA-B27 antigen. Diagnosis and Treatment of Ankylosing spondylitis: There is no specific test to diagnose ankylosing spondylitis, but imaging by X-ray and MRI may show evidence of inflammation of the sacroiliac joint between the sacrum (the triangular bone at the lowest part of the back) and the ilium (the bone felt on the upper part of the hip).

There are no specific lab tests to identify ankylosing spondylitis. Certain blood tests can check for markers of inflammation, but inflammation can be caused by many different health problems. People’s blood can be tested for the HLA-B27 gene, but most people who have that gene don’t have ankylosing spondylitis, and fewer black people with the disease have the gene than do white people.

There’s no current cure for ankylosing spondylitis, but treatment can manage pain and prevent disability. Proper, timely treatment can help reduce symptoms. It may also slow or even stop possible complications, such as bone deformity.

The major types of medications used to treat ankylosing spondylitis are pain-relievers and drugs aimed at stopping or slowing the progression of the disease. All of these have potentially serious side effects. Nonsteroidal anti-inflammatory drugs (NSAIDs) — such as naproxen (Naprosyn) and indomethacin (Indocin) — are the medications doctors most commonly use to treat ankylosing spondylitis.

If NSAIDs aren’t helpful, the doctor might suggest starting a biologic medication, such as a tumour necrosis factor (TNF) blocker or an interleukin 17 (IL-17) inhibitor. TNF blockers target a cell protein that causes inflammation in the body. IL-17 plays a role in our body’s defence against infection and also has a role in inflammation.

Deep breathing exercises may help keep the chest cage flexible. Swimming is an excellent form of exercise for people with spondylitis because it helps maintain the proper extension of the spine. For smokers, it is advisable to quit due to the potential breathing problems associated with ankylosing spondylitis.

Most people with ankylosing spondylitis don’t need surgery. However, the doctor might recommend surgery if people have severe pain or joint damage, or if their hip joint is so damaged that it needs to be replaced.

Good posture is important. Patients should choose chairs, tables, and other work surfaces that will help them avoid slumped or stooped postures. Patients are encouraged to sleep on a hard mattress with their back straight. Do not sleep on several pillows with their neck flexed forward. Lying face down with the arms extended is an exercise to help maintain an erect posture.