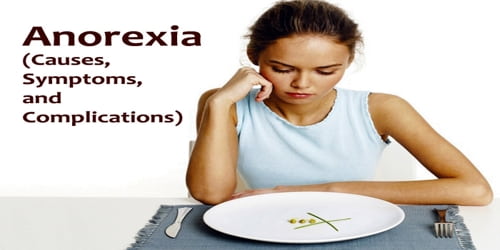 Definition: Anorexia (or anorexia nervosa), from Ancient Greek ανορεξία: ‘ἀν-‘ “without” + ‘όρεξις’, spelled ‘órexis’ meaning “appetite” is a serious mental illness where people are of low weight due to limiting their energy intake. It can affect anyone of any age, gender, or background.

While the term in non-scientific publications is often used interchangeably with anorexia nervosa, many possible causes exist for a decreased appetite, some of which may be harmless, while others indicate a serious clinical condition or pose a significant risk.

Sometimes, someone’s symptoms may not exactly match all the criteria a doctor check for to diagnose anorexia – for example, they may remain at a weight considered “normal” for their age, sex, and expected development. Depending on the exact symptoms, they might be diagnosed with atypical anorexia or another form of other specified feeding or eating disorder (OSFED).

To prevent weight gain or to continue losing weight, people with anorexia usually severely restrict the amount of food they eat. They may control calorie intake by vomiting after eating or by misusing laxatives, diet aids, diuretics or enemas. They may also try to lose weight by exercising excessively. No matter how much weight is lost, the person continues to fear weight gain.

There are two common types of anorexia, which are as follows:

Though two classifications of this eating disorder exist, both types exhibit similar symptoms, such as an irrational fear of weight gain and abnormal eating patterns. Causes, Signs, and Symptoms of Anorexia: Anorexia can cause severe physical problems because of the effects of starvation on the body. It can lead to loss of muscle strength and reduced bone strength. People whose periods have previously started may find that they stop. They may also find that their sex drive decreases.

The exact cause of anorexia is unknown. As with many diseases, it’s probably a combination of biological, psychological and environmental factors.

An individual suffering from anorexia nervosa may reveal one or several signs and symptoms such as:

Anorexia affects all of the organs in the body. If left untreated, the body becomes severely malnourished. This can result in damage that is not treatable, even if the disease is taken under control.

Emotional and behavioral signs and symptoms may include:

Complications: Anorexia can have numerous complications. At its most severe, it can be fatal. Anorexia is a relatively common condition that can lead patients to have dangerous electrolyte imbalances, leading to acquired long QT syndrome which can result in sudden cardiac death. This can develop over a prolonged period of time, and the risk is further heightened when feeding resumes after a period of abstaining from consumption.

Other complications of anorexia include:

Care must be taken under such circumstances to avoid potentially fatal complications of refeeding syndrome. In addition to the host of physical complications, people with anorexia also commonly have other mental health disorders as well.