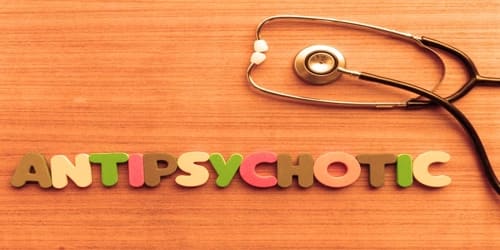 Antipsychotics, also known as neuroleptics or major tranquilizers are a range of medications that are used for some types of mental distress or disorder – mainly schizophrenia and manic depression (bipolar disorder). They can also be used to help severe anxiety or depression.

Antipsychotic medications are used as a short-term treatment for bipolar disorder to control psychotic symptoms such as hallucinations, delusions, or mania symptoms. These symptoms may occur during acute mania or severe depression. Some also treat bipolar depression, and several have demonstrated long-term value in preventing future episodes of mania or depression.

The long-term use of antipsychotics is associated with side effects such as involuntary movement disorders, gynecomastia, and metabolic syndrome. They are also associated with increased mortality in elderly people with dementia.

In people with bipolar disorder, antipsychotics are also used “off-label” as sedatives, for insomnia, for anxiety, and/or for agitation. Often, they are taken with a mood-stabilizing drug and can decrease symptoms of mania until mood stabilizers take full effect.

Some antipsychotics seem to help stabilize moods on their own. As a result, they may be used alone as a long-term treatment for people who don’t tolerate or respond to lithium and anticonvulsants.

Antipsychotics are most frequently used for the following conditions:

Antipsychotics can be prescribed to be taken in various different ways. Most commonly this will be orally in tablet or liquid form, but some of them can also be prescribed as depot injections.

For the past 10 years or so doctors have talked about two different groups of antipsychotics:

Recent large independent research studies – not paid for by the drug companies – suggest that the new drugs are not really different – but are, in some situations, easier to use. Rather than getting rid of these symptoms completely, the drugs may just stop a person feeling so bothered by them – so a person feels more stable and can get on with leading their life the way he/she wants to.