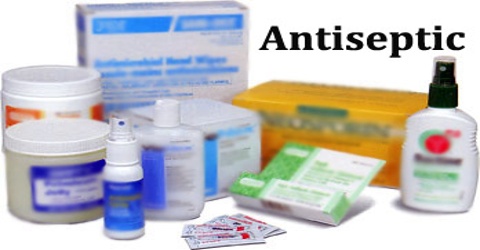 Antiseptic is a substance that inhibits the proliferation of infectious agents. It is a product which eradicates or prevents the development of bacteria or viruses. Antiseptics are generally distinguished from antibiotics by the latter’s ability to be transported through the lymphatic system to destroy bacteria within the body, and from disinfectants, which destroy microorganisms found on non-living objects. The first implementation of antiseptic policies in a hospital setting occurred in the late 1840s in Vienna, Austria, pioneered by Dr. Ignaz Semmelweis, a physician trying to control his hospital’s sprawling death rate. Semmelweis required doctors who’d been near a dead body to begin washing their hands in a chlorine bleach solution before seeing patients.

After Semmelweis’s chlorine solution, the first widely tested antiseptics were based on alcohol, iodine and carbolic acid or phenol.

Some antibiotics are true germicides, capable of destroying microbes (bacteriocidal), while others are bacteriostatic and only prevent or inhibit their growth. Antibacterials are antiseptics that have the proven ability to act against bacteria. Microbicides which destroy virus particles are called viricides or antivirals.

Mechanisms and Actions of Antiseptic

An antiseptic can be a fungicidal, against fungi, bactericidal, against bacteria, virucidal, against viruses, or sporicidal, against spores, but in general combines all of these functions. Antiseptics are applied locally on the affected zone. A strict antisepsis is necessary before any surgical intervention and requires a particular protocol and precautions to avoid germs entering the body. All antiseptics interfere with crucial life processes of microorganisms. Chlorhexidine is an ingredient in some mouthwashes and in hospital settings. Hydrogen peroxide solution is a longstanding antiseptic used in everything from mouthwashes to light wound cleansing. Various compounds of iodine are used in pre- and post-operative infection prevention around incisions or cuts. Alcohol remains one of the most common antiseptic chemicals for mouthwash and cut care.

Antiseptics are used on the surface of the body; the term disinfectant is used for medical equipment and other surfaces. Use of antiseptics in hospitals was pioneered in 1867 by the Scottish surgeon Dr. Joseph Lister (1827-1912) who used diluted carbolic acid to disinfect wounds, dressings, and implements. Chemical used in destroying disease causing microorganisms, also called microbial, microbiological, pathogens, externally on wounds or under medical supervision, taken internally to treat infection. Polyhexanide (polyhexamethylene biguanide, PHMB) is an antimicrobial compound suitable for clinical use in critically colonized or infected acute and chronic wounds. The physicochemical action on the bacterial envelope prevents or impedes the development of resistant bacterial strains.