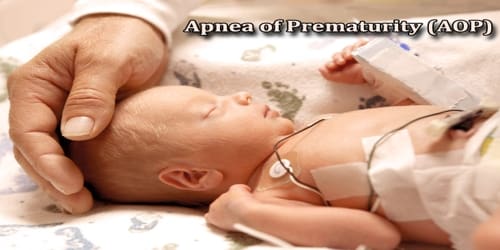 Definition: Apnea of prematurity (AOP) is defined as cessation of breathing by a premature infant that lasts for more than 20 seconds and/or is accompanied by hypoxia or bradycardia. Apnea is traditionally classified as obstructive, central, or mixed. Apnea of prematurity refers to short episodes of stopped breathing in babies who were born before 37 weeks of pregnancy (premature birth).

Apnea may be followed by bradycardia, which is a decreased heart rate. When breathing slows, the heart rate also slows. A common term for apnea with bradycardia is “As and Bs.” Apnea is classified as central, obstructive, or mixed. Note the following: Obstructive apnea may occur when the infant’s neck is hyperflexed or conversely, hyperextended. It may also occur due to low pharyngeal muscle tone or to inflammation of the soft tissues, which can block the flow of air through the pharynx and vocal cords. Central apnea occurs when there is a lack of respiratory effort. This may result from central nervous system immaturity, or from the effects of medications or illness.

Apnea of prematurity usually ends on its own after a few weeks. Once it goes away, it usually doesn’t come back. But no doubt about it — it’s frightening while it’s happening. There are several reasons why newborns, in particular, those who were born early, may have apnea, including:

Other stresses in a sick or premature baby may worsen apnea, including:

Most babies who develop apnea are premature. It appears to be more common during sleep, especially during active sleep. This is a period when the baby has rapid eye movement (REM) while sleeping. About half of all premature babies have apnea of prematurity.

The breathing pattern of newborns is not always regular and may be called “periodic breathing.” This pattern is even more likely in newborns born early (preemies). Apnea episodes that last longer than 20 seconds are considered serious. The baby may also have a:

Apnea is common in premature babies. Most babies have normal outcomes. Mild apnea does not appear to have long-term effects. However, preventing multiple or severe episodes is better for the baby over the long-term. Diagnosis and Treatment of Apnea of prematurity: Apnea of prematurity (AOP) is fairly common in preemies. Doctors usually diagnose the condition before the mother and baby are discharged from the hospital, and the apnea usually goes away on its own as the infant matures.

AOP can be readily identified from other forms of infant apnea such as obstructive apnea, hypoventilation syndromes, breathing regulation issues during feeding, and reflux-associated apnea with an infant pneumogram or infant apnea/sleep study. It is important to find out if the apnea is due primarily to prematurity or if it is caused by another problem. Diagnostic procedures may include:

Generally, babies who are born at less than 35 weeks’ gestation have periods when they stop breathing or their heart rates drop. ‘The medical name for a slowed heart rate is bradycardia.’ These breathing abnormalities may begin after 2 days of life and last for up to 2 to 3 months after the birth. Smaller and more premature infants are more likely to have AOP.

AOP can happen once a day or many times a day. Doctors will closely watch an infant make sure the apnea isn’t due to another condition, such as infection.

Continuous positive airway pressure. A mechanical breathing machine that pushes a continuous flow of air or oxygen to the airways to help keep tiny air passages in the lungs open.

Since AOP is fundamentally a problem of the immaturity of the physiological systems of the premature infant, it is a self-limited condition that will resolve when these systems mature. It is unusual for an infant to continue to have significant problems with AOP beyond 42 weeks post-conceptual age. There is no evidence that a history of AOP places an infant at increased risk for SIDS. However, any premature infant (regardless of whether they have had AOP) is at increased risk of SIDS. It is important that other factors related to SIDS risk be avoided (exposure to smoking, prone sleeping, excess bedding materials, etc.)