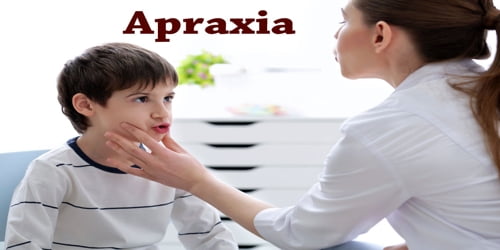 Definition: Apraxia is a speech disorder which makes it difficult for a person to speak in a manner which is formed correctly and consistently. It is a disorder of the brain and nervous system in which a person is unable to perform tasks or movements when asked, even though:

People who suffer from apraxia are usually unable to perform common expressive gestures on request, such as waving goodbye, beckoning, or saluting, or to pantomime drinking, brushing teeth, etc. Apraxia may also affect oral, non-speech movements, like pretending to cough or blow out a candle.

There are several types of apraxia including:

There are two forms of apraxia of speech — acquired apraxia and developmental apraxia.

Acquired apraxia usually occurs because of some injury or damage to the area of the brain responsible for speech. While this does sometimes occur in children, it is widely an adult disorder. This form of speech apraxia will affect the speech skills which the person previously possessed. It may be the result of a stroke, injury or illness.

Developmental apraxia of speech is also known as childhood apraxia of speech. This condition is present from birth, and it affects a child’s ability to form sounds and words. Children with speech apraxia often have far greater abilities to understand speech than to express themselves with spoken words. Causes, Signs, and Symptoms of Apraxia: Apraxia is caused by damage to the brain. When apraxia develops in a person who was previously able to perform the tasks or abilities, it is called acquired apraxia.

The most common causes of acquired apraxia are:

Apraxia may also be seen at birth. Symptoms appear as the child grows and develops. The cause is unknown.

There are a variety of speech-related symptoms that can be associated with apraxia, including:

Childhood apraxia of speech rarely occurs alone. It is often accompanied by other language or cognitive deficits, which may cause: Diagnosis and Treatment: Although qualitative and quantitative studies exist, there is little consensus on the proper method to assess for apraxia. The criticisms of past methods include failure to meet standard psychometric properties as well as research-specific designs that translate poorly to non-research use.

The following tests may be done if the cause of the disorder is not known:

As stated above, apraxia should not be confused with aphasia; however, they frequently occur together. It has been stated that apraxia is so often accompanied by aphasia that many believe that if a person displays AOS; it should be assumed that the patient also has some level of aphasia.

There are various treatment approaches used for apraxia. How effective they are can vary from person to person. For the best results, apraxia treatment must be developed to meet a given individual’s needs. Most children with apraxia of speech benefit from meeting one on one with a speech-language pathologist three to five times a week. They may also need to work with their parents or guardians to practice the skills they are developing.

Many therapists believe that sign language is beneficial for children who have difficulty being understood. They often recommend that children attempt to say the words they are signing to practice making the necessary movements with their mouths.

In all cases of this disorder, encouragement and support are vital. This is an incredibly frustrating and trying ailment for both the patient and those around them. With time and patience, the perfect course of action to encourage progress in the individual’s speech will become apparent.