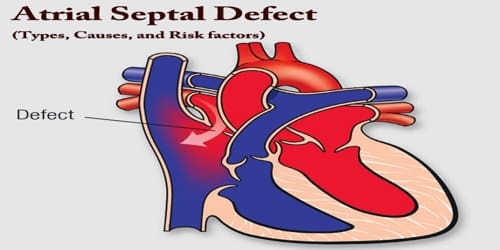 Definition: Atrial septal defect (ASD) is a birth defect of the heart in which there is a hole in the wall (septum) that divides the upper chambers (atria) of the heart. Some flow is a normal condition both pre-birth and immediately post-birth via the foramen ovale, however, when this does not naturally close after birth it is referred to as a patent (open) foramen ovale (PFO).

This defect allows oxygen-rich blood to leak into the oxygen-poor blood chambers in the heart. ASD is a defect in the septum between the heart’s two upper chambers (atria). The septum is a wall that separates the heart’s left and right sides.

Small defects may never cause a problem and may be found incidentally. It’s also possible that small atrial septal defects may close on their own during infancy or early childhood.

An ASD may not produce noticeable signs or symptoms, especially if the defect is small. Also, in terms of health risks, people who have had a cryptogenic stroke are more likely to have a PFO than the general population.

An adult who has had an undetected atrial septal defect for decades may have a shortened lifespan from heart failure or high blood pressure that affects the arteries in the lungs (pulmonary hypertension). Surgery may be necessary to repair atrial septal defects to prevent complications. Causes and Risk factors of Atrial septal defect: The causes of heart defects such as atrial septal defect among most babies are unknown. Doctors know that heart defects present at birth (congenital) arise from errors early in the heart’s development, but there’s often no clear cause. Genetics and environmental factors may play a role.

Every child is born with an opening between the upper heart chambers. It’s a normal fetal opening that allows blood to detour away from the lungs before birth. After birth, the opening is no longer needed and usually closes or becomes very small within several weeks or months. The heart is divided into four hollow chambers, two on the right and two on the left. To pump blood throughout the body, the heart uses its left and right sides for different tasks.

Some of the other causes are:

These types of heart defects also are thought to be caused by a combination of genes and other risk factors, such as things the mother comes in contact with in the environment or what the mother eats or drinks or the medicines the mother uses.

Risk of having a baby with a heart defect, including:

Due to the communication between the atria that occurs in ASDs, disease entities or complications from the condition are possible. Patients with an uncorrected atrial septal defect may be at increased risk for developing a cardiac arrhythmia, as well as more frequent respiratory infections.

However, having a larger defect or having complications such as heart failure, arrhythmias or pulmonary hypertension can increase people’s risk of complications during pregnancy. Doctors strongly advise women with Eisenmenger syndrome not to become pregnant because it can endanger their lives.