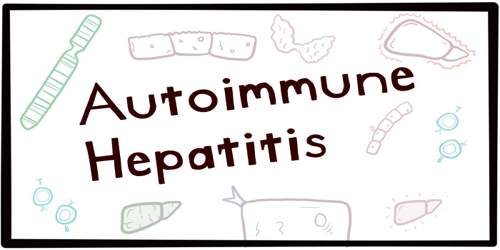 Autoimmune hepatitis (AIH) is a chronic condition and can result in cirrhosis (scarring) of the liver and (ultimately) liver failure. AIH is a disease in which the body’s immune system attacks liver cells, causing inflammation of the liver (hepatitis). It is formerly called lupoid hepatitis. AIH has an incidence of 1-2 per 100,000 per year and a prevalence of 10-20/100,000. As with most other autoimmune diseases, it affects women much more often than men (70%). Liver enzymes are elevated, as may be bilirubin. There are two major types of autoimmune hepatitis, and both are rare. Type 1 is the more common of the two. People are more likely to get it if they are a woman age 15 to 40, although people of any age or gender can get it. Type 2 usually happens to girl’s age 2 to 14.

Autoimmune hepatitis is an uncommon cause of persistent liver inflammation (chronic hepatitis). The cause is not known. If left untreated, the inflammation causes scarring of the liver (cirrhosis). However, with treatment, the outlook for people with this condition is very good. Treatment is usually with steroids and other medicines which suppress inflammation.

The cause is not clear. It is thought to be an autoimmune disease. Our immune system normally defends us against infection from bacteria, viruses and other germs. In people with autoimmune diseases, the immune system attacks part or parts of the body as if they were foreign. This causes inflammation and may damage the affected part or parts of the body. 60% of patients have chronic hepatitis that may mimic viral hepatitis, but without serologic evidence of a viral infection. The disease is strongly associated with anti-smooth muscle autoantibodies. There is currently no conclusive evidence as to any specific cause. However, certain risk factors have been identified, including:

Other autoimmune conditions can cause symptoms of liver disease and are also associated with the development of autoimmune hepatitis (AIH).

Symptoms of Autoimmune hepatitis (AIH) range from mild to severe. In the early stages, people may have no symptoms, but in later stages, symptoms can appear suddenly. They may also slowly develop over time. Additional symptoms that may occur include:

Diagnosis and Treatment of Autoimmune Hepatitis

Many people with autoimmune hepatitis have no symptoms, or only vague symptoms, for quite some time in the early stages of the disease. Therefore, the diagnosis is often made when people have tests for an unrelated condition. A number of specific antibodies found in the blood (antinuclear antibody (ANA), anti-smooth muscle antibody (SMA), anti-liver kidney microsomal antibodies (LKM-1, LKM-2, LKM-3), anti soluble liver antigen (SLA), liver–pancreas antigen (LP), and anti-mitochondrial antibody (AMA)) are of use, as is finding an increased Immunoglobulin G level. However, the diagnosis of autoimmune hepatitis always requires a liver biopsy. Various tests may also be done to rule out other liver disorders such as viral hepatitis. Treatment is almost always needed. Early treatment can improve symptoms, reduce the risk of complications, and also greatly improve patient’s outlook. According to the National Digestive Diseases Information Clearinghouse, 70 percent of AIH patients will go into remission. Budesonide has been shown to be more effective in inducing remission than prednisone, and result in fewer adverse effects. Those with autoimmune hepatitis who do not respond to glucocorticoids and azathioprine may be given other immunosuppressives like mycophenolate, ciclosporin, tacrolimus, methotrexate, etc. Liver transplantation can treat AIH. However, the disease can sometimes recur even after a transplant. According to the National Digestive Diseases Information Clearinghouse (NDDIC), there is a 90 percent one-year survival rate for patients who have a transplant. The five-year survival rate is 70 to 80 percent.