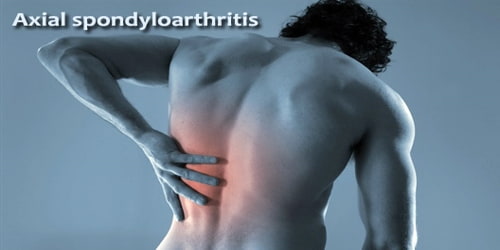 The condition (Axial spondyloarthritis) often affects the bones and joints at the base of the spine where it connects with the pelvis. When the disease is active, these joints become inflamed.

Unlike back pain caused by sports injuries or accidents, axSpA is an inflammatory condition and is generally chronic. People with axSpA can experience periods of painful episodes called ‘flares’, followed by temporary relief.

This type of inflammatory back pain worsens during a period of inactivity – especially at night and early in the morning – and improves with physical activity. Axial spondyloarthritis can be divided into two classes:

Axial spondyloarthritis causes swelling between the vertebrae, which are the disks that make up the spine, and in the joints between the spine and pelvis. The symptoms can vary but most people experience back pain, stiffness and, in some cases, disability.

Symptoms of axSpA can have a major impact on quality of life. The pain and stiffness caused by axSpA can limit the ability to work, socialize and exercise. People with axSpA may also experience:

Quality of life can be improved if people with axSpA get treatment from rheumatologists, medical specialists who have been trained to diagnose and treat the disease. The problem is that the disease (axSpA) can be mild or it can take years before the x-rays show changes. And even when the x-rays are abnormal, interpretation is always subject to some debate.

Traditional NSAIDs and COX-2 NSAIDs are effective for treating axSpA. The potential harms may not differ when compared to a placebo treatment in the short term. Various NSAIDs are equally effective (e.g.: Cox2 NSAIDS and traditional NSAIDS). Continuous NSAID use may reduce radiographic spinal progression, but this requires confirmation.