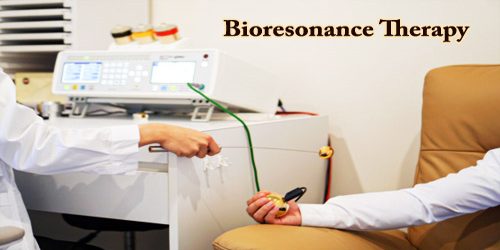 Bioresonance is a form of holistic diagnosis and therapy. It is claimed that the bioresonance devices used in the therapy can read the energy wavelengths coming from cells within the body and that the frequencies of these wavelengths provide information about the health of the body.

Bioresonance Therapy (including MORA therapy) uses our body’s own energy field. Our body (organs, cells, tissues, etc.) radiates electromagnetic fluctuations. The bioresonance equipment records these fluctuations via electrodes placed on our body and electronically changes abnormal fluctuations, for example, by reversing the polarity, before sending them back to our body as therapeutic fluctuations. Signals stressing the body (such as fluctuation patterns from environmental stresses) are reduced and ideally eliminated. This strengthens and activates the body’s ability to heal itself. We put the body in a position to increasingly regulate and detoxify itself.

Practitioners believe they can interpret the results obtained from the devices which can then be used to diagnose diseases or adverse medical conditions. Some practitioners also claim to use the results to treat the diagnosed conditions by using the same electromagnetic frequencies to create a “resonance” within the body’s cells.

History and Method of Bioresonance Therapy –

Bioresonance therapy was invented (in Germany) in 1977 by Franz Morell and his son-in-law, engineer Erich Rasche. Initially they marketed it as “MORA-Therapie”, for MOrell and RAsche. Some of the machines contain an electronic circuit measuring skin-resistance, akin to the E-meter used by Scientology, which the bioresonance creators sought to improve; Franz Morell had links with Scientology.

Practitioners claim to be able to detect a variety of diseases and addictions. Some practitioners also claim they can treat diseases using this therapy without drugs, by stimulating a change of “bioresonance” in the cells, and reversing the change caused by the disease. The devices would need to be able to isolate and pinpoint pathogens’ responses from the mixture of responses the device receives via the electrodes. Transmitting these transformed signals over the same electrodes is claimed by practitioners to generate healing signals that have the curative effect.

Bioresonance therapy also uses fluctuations in substances, such as non-tolerated foods, viruses, bacteria and fungi, for therapeutic purposes; toxic heavy metals, pesticides, environmental contaminants and non-tolerated materials in teeth are also used. If we are contaminated with these substances, the effects in terms of energy on our entire body may be completely eliminated by us switching over to the exact opposite information for the corresponding substance. This results in significant strengthening of our body’s own defensive and self-healing capabilities.

In 2018, the ASA considered complaints about a clinic that claimed their bioresonance therapy had been used to diagnose conditions such as “Weight and digestive problems, bloating; Heart conditions; Arthritis, joint pains; Back pain; Diabetes; Skin problems, rashes; Psoriasis, eczema, acne; Rhinitis, sinus; Headaches, migraine, depression, anxiety, fatigue; Sleeping problems etc.”.  Despite demonstrating that the device used for making the diagnoses had been appropriately CE Marked, the ASA considered that this alone did not constitute evidence of efficacy.  In the absence of clinical evidence to support the diagnosis claims, the complaint was upheld.

Proven cases of online fraud have occurred, with a practitioner making false claims that he had the ability to cure cancer, and that his clients did not need to follow the chemotherapy or surgery recommended by medical doctors, which can be life-saving. Ben Goldacre ridiculed the BBC when it reported as fact a clinic’s claim that the treatment had the ability to stop 70% of clients smoking, a better result than any conventional therapy.

In 2019 the ASA considered a complaint about advertising claims that bioresonance could be used to treat various medical issues ranging from skin conditions and allergies to digestive disorders including Crohn’s disease. In that case, one of the clinical papers that was submitted in evidence was found not to have been peer-reviewed and lacked sufficient detail regarding the methodology, statistical significance or analysis of results. Many of the studies in the document were also unrelated to conditions listed in the ad.  The second paper submitted included five studies about Bioresonance. However, four of the studies were non-human studies and the one human study that remained did not address any of the conditions referenced in the ads. The ASA subsequently ruled that none of efficacy claims for bioresonance therapy had been supported by evidence and were therefore considered misleading.

In the United States of America the U.S. Food and Drug Administration (FDA) classifies “devices that use resistance measurements to diagnose and treat various diseases” as Class III devices, which require FDA approval prior to marketing. The FDA has banned some of these devices from the US market, and has prosecuted many sellers of electrical devices for making false claims of health benefits. According to Quackwatch, the therapy is completely nonsensical and the proposed mechanism of action impossible.