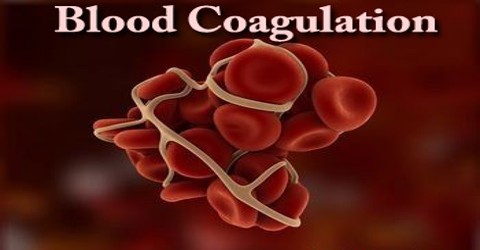 Blood Coagulation is a process that changes circulating substances within the blood into an insoluble gel. The gel plugs leaks in blood vessels and stops the loss of blood. The process requires coagulation factors, calcium and phospholipids. Coagulation (also known as clotting) actually is a complex process by which the blood forms clots to block and then heal a lesion/wound/cut and stop the bleeding. It is a crucial part of hemostasis – stopping blood loss from damaged blood vessels. In hemostasis a damaged blood vessel wall is plugged by a platelet and a fibrin-containing clot to stop the bleeding, so that the damage can be repaired. The formation of a clot is often referred to as secondary hemostasis, because it forms the second stage in the process of arresting the loss of blood from a ruptured vessel. The first stage, primary hemostasis, is characterized by blood vessel constriction (vasoconstriction) and platelet aggregation at the site of vessel injury. Under abnormal circumstances, clots can also form in a vessel that has not been breached; such clots can result in the occlusion (blockage) of the vessel.

The ability of the body to control the flow of blood following vascular injury is paramount to continued survival. The process of blood coagulation or clotting and then the subsequent dissolution of the clot, following repair of the injured tissue, is termed hemostasis. Hemostasis comprises four major events that occur in a set order following the loss of vascular integrity: Coagulation factors are proteins, mostly manufactured by the liver. They were originally numbered in the order of their discovery, traditionally using Roman numerals from I-XIII. Some of the numbers such as III and VI are not used any more and in recent years, many proteins that affect blood clotting have been discovered but have been given a name rather than a number. When a blood vessel wall is damaged, or any kind of wound occurs, a complex set of chemical reactions involving these coagulation factors (and acting rather like a waterfall) takes place. The final step of the cascade of chemical reactions is to convert fibrinogen – Factor I – into fibrin, forming a mesh which clumps platelets and blood cells into a solid clot, plugging the hole and stopping the bleeding. Patients with Hemophilia A have deficient levels of Factor VIII, while patients with Hemophilia B have deficient levels of Factor IX. Blood Coagulation refers to the process of forming a clot to stop bleeding.  Coagulation is a complicated subject and is greatly simplified here for the student’s understanding.

Secondary Hemostasis. Platelets alone are not enough to secure the damage in the vessel wall.   A clot must form at the site of injury.  The formation of a clot depends upon several substances called clotting factors.  These factors are designated by roman numerals I through XIII.  These factors activate each other in what as known as the clotting cascade.  The end result of this cascade is that fibrinogen, a soluble plasma protein, is cleaved into fibrin, a nonsoluble plasma protein.  The fibrin proteins stick together forming a clot. The clotting cascade occurs through two separate pathways that interact, the intrinsic and the extrinsic pathway.

Extrinsic Pathway – The extrinsic pathway is activated by external trauma that causes blood to escape from the vascular system.  This pathway is quicker than the intrinsic pathway.  It involves factor VII.

Common Pathway – Both pathways meet and finish the pathway of clot production in what is known as the common pathway.  The common pathway involves factors I, II, V, and X.