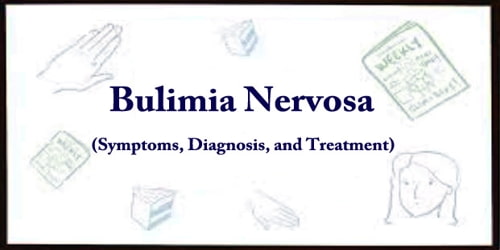 Definition: Bulimia nervosa, also known as simply bulimia, is a serious, potentially life-threatening eating disorder. People with bulimia may secretly binge eating large amounts of food with a loss of control over the eating and then purge, trying to get rid of the extra calories in an unhealthy way.

Bulimia tends to develop late in childhood or in early adulthood. It affects females more often than males. People with bulimia often perform the behaviours in secret, feeling disgusted and ashamed when they binge, yet relieved once they purge. People with bulimia usually weigh within the normal range for their age and height. However, they may fear gaining weight, have the desire to lose weight, and may feel intensely dissatisfied with their bodies.

Bulimia was named and first described by the British psychiatrist Gerald Russell in 1979. The exact cause of bulimia nervosa is currently unknown; though it is thought that multiple factors contribute to the development of this eating disorder, including genetic, environmental, psychological, and cultural influences.

Diagnosis is based on a person’s medical history; however, this is difficult, as people are usually secretive about their binge eating and purging habits. Further, the diagnosis of anorexia nervosa takes precedence over that of bulimia. Other similar disorders include binge eating disorder, Kleine-Levin syndrome, and borderline personality disorder.

Cognitive behavioural therapy is the primary treatment for bulimia. Antidepressants of the selective serotonin reuptake inhibitor (SSRI) or tricyclic antidepressant classes may have a modest benefit.

If people have bulimia, they are probably preoccupied with their weight and body shape. People may judge their self severely and harshly for their self-perceived flaws. Because it’s related to self-image and not just about food bulimia can be hard to overcome. Signs and Symptoms of Bulimia nervosa: Bulimia typically involves rapid and out-of-control eating, which may stop when the bulimic is interrupted by another person or the stomach hurts from over-extension, followed by self-induced vomiting or other forms of purging. This cycle may be repeated several times a week or, in more serious cases, several times a day.

Physical signs and symptoms of this eating disorder are:

Signs and symptoms of binge eating and purging are:

Bulimia nervosa can also create problematic strains between the sufferer and family and friends, particularly as the individual has abnormal eating behaviours and/or the avoidance of social activities to engage in binge/purge episodes. Diagnosis and Treatment of Bulimia nervosa: The onset of bulimia nervosa is often during adolescence, between 13 and 20 years of age, and many cases have previously suffered from obesity, with many sufferers relapsing in adulthood into episodic bingeing and purging even after initially successful treatment and remission. If the primary care provider suspects people have bulimia, he or she will typically:

The primary treatment for bulimia often combines psychotherapy, antidepressants, and nutritional counselling. It is helpful to find a psychologist or psychiatrist experienced in dealing with eating disorders. The same is true for nutritional counselling, whether the patient sees the family doctor or another health professional.

Antidepressants may help reduce the symptoms of bulimia when used along with psychotherapy. The only antidepressant specifically approved by the Food and Drug Administration to treat bulimia is fluoxetine (Prozac), a type of selective serotonin reuptake inhibitor (SSRI), which may help even if they are not depressed.

The final phase of bulimia treatment focuses on healing from emotional issues that may have caused the eating disorder.  Treatment may address interpersonal relationships and can include cognitive behaviour therapy, dialectic behaviour therapy, and other related therapies.