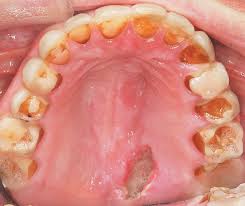 Bulimia, also called bulimia nervosa, is a psychological eating disorder. Bulimia is characterized by episodes of binge-eating followed by inappropriate methods of weight control (purging). Inappropriate methods of weight control include vomiting, fasting, enemas, excessive use of laxatives and diuretics, or compulsive exercising. Excessive shape and weight concerns are also characteristics of bulimia. A binge is an episode where an individual eats a much larger amount of food than most people would in a similar situation. Binge eating is not a response to intense hunger. It is usually a response to depression, stress, or self esteem issues. During the binge episode, the individual experiences a loss of control. However, the sense of a loss of control is also followed by a short-lived calmness. The calmness is often followed by self-loathing. The cycle of overeating and purging usually becomes an obsession and is repeated often.

Bulimia was only diagnosed as its own eating disorder in the 1980s.

People with bulimia can look perfectly normal. Most of them are of normal weight, and some may be overweight. Women with bulimia tend to be high achievers.

Sufferers consume huge quantities of food. Sometimes up to 20,000 calories at a time. The foods on which they binge tend to be foods labeled as “comfort foods” — sweet foods, high in calories, or smooth, soft foods like ice cream, cake, and pastry. An individual may binge anywhere from twice a day to several times daily.

A Family Member has an Eating Disorder

There is currently no definite known cause of bulimia. Researchers believe it begins with dissatisfaction of the person’s body and extreme concern with body size and shape. Usually individuals suffering from bulimia have low self-esteem, feelings of helplessness and a fear of becoming fat.

Some of the most common complications of bulimia are:

Some of the most common symptoms of bulimia are:

There are certain professions where eating orders are more prevalent. Thinness is usually emphasized in these professions. The professions are: modeling, dancing, gymnastics, wrestling, and long-distance running.

Bulimia can be overcome.

Treatment for bulimia involves psychological counseling and sometimes medicines such as antidepressants. Treatment does not usually require staying in the hospital, although this is sometimes needed. Both professional counseling and antidepressant medicine can help reduce episodes of binging and purging and help you recover from bulimia. Both are long-term treatments that may require weeks or months before you notice significant results. You may need treatment with counseling and possibly medicines for more than a year.

People who seek treatment for bulimia or another eating disorder may have other health problems caused by the disorder. If you have had bulimia for a long time without treatment, or if you have used substances such as laxatives, diuretics, or ipecac syrup to purge, then you may have a health problem such as dehydration that needs treatment first. In serious cases, these conditions related to bulimia may require you to spend time in the hospital.

Initial treatment depends how severe the bulimia is and how long you have had it.

If you have no other conditions that need treatment first, then treatment for bulimia usually consists of: