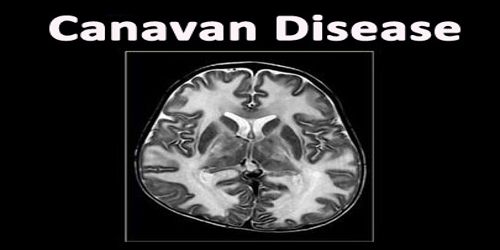 Canavan disease is a rare inherited disorder that damages the ability of nerve cells (neurons) in the brain to send and receive messages. It is also called Canavan–van Bogaert–Bertrand disease. This disease is one of a group of genetic disorders called leukodystrophies. Leukodystrophies disrupt the growth or maintenance of the myelin sheath, which is the covering that protects nerves and promotes the efficient transmission of nerve impulses. Canavan disease is caused by a deficiency of the enzyme aminoacylase 2, and is one of a group of genetic diseases referred to as leukodystrophies. It is characterized by degeneration of myelin in the phospholipid layer insulating the axon of a neuron and is associated with a gene located on human chromosome 17.

The rate of Canavan disease in the general population is likely much lower, though it isn’t known for sure. Children born with Canavan disease may not have any noticeable symptoms at birth. Signs of the condition usually start to appear within a few months. There is currently no effective treatment and affected children die in the first decade of life. Also known as spongy degeneration of the central nervous system and Canavan-Van Bogaert-Bertrand disease.

Neonatal/infantile Canavan disease is the most common and most severe form of the condition. Affected infants appear normal for the first few months of life, but by age 3 to 5 months, problems with development become noticeable. These infants usually do not develop motor skills such as turning over, controlling head movement, and sitting without support. Other common features of this condition include weak muscle tone (hypotonia), an unusually large head size (macrocephaly), and irritability. Feeding and swallowing difficulties, seizures, and sleep disturbances may also develop. The mild/juvenile form of Canavan disease is less common. Affected individuals have mildly delayed development of speech and motor skills starting in childhood. These delays may be so mild and nonspecific that they are never recognized as being caused by Canavan disease.

Canavan disease was first described in 1931 by Myrtelle Canavan. In 1931, she co-wrote a paper discussing the case of a child who had died at sixteen months and whose brain had a spongy white section. Canavan was the first to identify this degenerative disorder of the central nervous system, which was later named “Canavan Disease.”

Canavan disease is one of several genetic disorders known as leukodystrophies. These conditions affect the myelin sheath, the thin coating around nerves. Myelin also helps transmit signals from one nerve to another. Children affected by this condition lack an important enzyme called aspartoacylase (ASPA). This natural chemical helps break N-acetylaspartic acid down into the building materials that form myelin. Without ASPA, myelin can’t form properly, and nerve activity in the brain and the rest of the central nervous system is affected. Symptoms of Canavan disease vary, but generally include rapidly increasing head circumference, lack of head control, reduced visual responsiveness and abnormal muscle tone such as stiffness or floppiness. Children with Canavan disease cannot crawl, walk, sit or talk. Over time they may suffer seizures, become paralyzed, developmentally delayed or blind and have trouble swallowing. Deafness may also result. Symptoms usually become apparent when the infant is three to nine months old. Many children do not live past age 10.

Diagnosis and Treatments of Canavan Dieases

A prenatal blood test can reveal whether the fetus has Canavan disease. If any woman carries the Canavan gene mutation, they may want to discuss genetic testing prior to becoming pregnant. If they are already pregnant, they may want to have the blood test done to see if their baby has been affected.