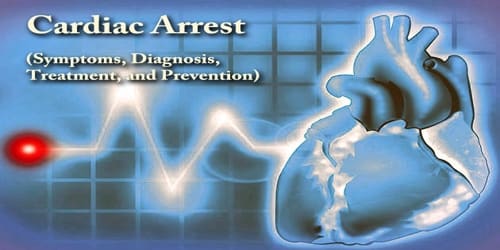 Symptoms include loss of consciousness and abnormal or absent breathing. Some individuals may experience chest pain, shortness of breath, or nausea before cardiac arrest. If not treated within minutes, it typically leads to death.

The risk of cardiac arrest increases:

If not treated immediately, it causes sudden cardiac death. With fast, appropriate medical care, survival is possible. Administering cardiopulmonary resuscitation (CPR), treating with a defibrillator or even just compressions to the chest can improve the chances of survival until emergency personnel arrive. If people are in cardiac arrest, they may:

Immediate emergency care is needed if people or someone who is with experiences these symptoms:

Certain types of prompt intervention can often reverse a cardiac arrest, but without such intervention, death is all but certain. In certain cases, cardiac arrest is an anticipated outcome of a serious illness where death is expected. Diagnosis and Treatment of Cardiac arrest: Cardiac arrest happens without warning and requires emergency treatment. Doctors rarely diagnose cardiac arrest with medical tests as its happening. Instead, cardiac arrest often is diagnosed after it happens. Doctors do this by ruling out other causes of a person’s sudden collapse.

A cardiac arrest is usually diagnosed clinically by the absence of a pulse. In many cases, lack of carotid pulse is the gold standard for diagnosing cardiac arrest, as lack of a pulse (particularly in the peripheral pulses) may result from other conditions (e.g. shock), or simply an error on the part of the rescuer.

Tests the doctor may recommend include:

Other tests that are often done include:

If people survive a cardiac arrest, the doctor may start them on one or more treatments to reduce the risk of another attack.

Often, people who have a cardiac arrest get a device called an implantable cardioverter defibrillator (ICD). This small device is surgically placed under the skin in their chest or abdomen. An ICD uses electric pulses or shocks to help control dangerous arrhythmias.

Prevention of Cardiac arrest: With positive outcomes following cardiac arrest unlikely, an effort has been spent in finding effective strategies to prevent cardiac arrest. With the prime causes of cardiac arrest being ischemic heart disease, efforts to promote a healthy diet, exercise, and smoking cessation are important.

If people have a high risk of sudden cardiac arrest, they may also wish to consider purchasing an automated external defibrillator (AED) for home use. AEDs can be expensive and aren’t always covered by health insurance. The more people who know how to respond to a cardiac emergency, the more the survival rate for sudden cardiac arrest can be improved.