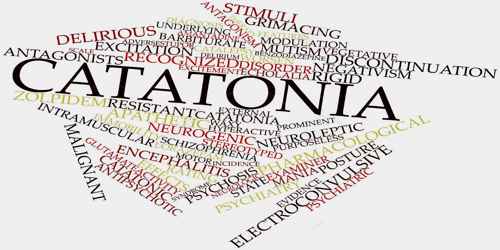 Catatonia is an abnormal condition often associated with schizophrenia and variously characterized by stupor, stereotypy, mania, and either rigidity or extreme flexibility of the limbs. It was first described in 1874 by Karl Ludwig Kahlbaum, in Die Katatonie Oder das Spannungsirresein (Catatonia or Tension Insanity). For the purpose of diagnosis, there are three types of catatonia, including catatonia associated with another mental disorder, catatonia disorder due to another medical condition, and unspecified catatonia. Catatonia is not recognized as a separate disorder, but is associated with psychiatric conditions such as schizophrenia (catatonic type), bipolar disorder, post-traumatic stress disorder, depression and other mental disorders, narcolepsy, as well as drug abuse or overdose (or both). It may also be seen in many medical disorders including infections, autoimmune disorders, focal neurologic lesions (including strokes), metabolic disturbances, alcohol withdrawal and abrupt or overly rapid benzodiazepine withdrawal.

Catatonia is sometimes referred to as catatonic syndrome, because there is not just one identifying sign or symptom associated with this condition or symptoms that appear separately from one another, but rather a collection of several symptoms that appear together at the same time. These specific signs and symptoms do not vary, regardless of the nature of the condition.

Catatonia is generally associated with, or due to, other medical conditions, especially brain disorders such as neurodegenerative disease and encephalitis. A severe vitamin B12 deficiency; infection; exposure to toxins; or conditions such as schizophrenia and other psychotic disorders, autism, extreme trauma, and mood disorders are also associated with catatonia. Catatonia can also be idiopathic, arising from an unknown cause. Any general medical patient who displays obvious related symptoms may be catatonic. The link between catatonia due to or associated with general medical conditions is unclear and the condition often goes unrecognized, but when identified, responds to standard catatonia treatments. People with catatonia may experience an extreme loss of motor skill or even constant hyperactive motor activity. Catatonic patients will sometimes hold rigid poses for hours and will ignore any external stimuli. People with catatonic excitement can suffer from exhaustion if not treated. Patients may also show stereotyped, repetitive movements.

At least three out of twelve symptoms must be present for a diagnosis of catatonia. These symptoms include:

Other common symptoms include rigidity and automatic obedience. When catatonia is associated with schizophrenia, stupor may continue for long periods of time as compared to schizophrenia associated with other psychiatric conditions, where there are likely to be long remissions. The following treatments are available for catatonic depression:

Benzodiazepines: Benzodiazepines are a class of psychoactive drugs that enhance the effect of the gamma-aminobutyric acid (GABA) neurotransmitter. In most people, these medications are effective for quickly relieving catatonic symptoms, including anxiety, muscles spasms, and insomnia. However, benzodiazepines are also highly addictive, so they’re usually used as a short-term treatment method.

N-Methyl-D-Aspartate: There’s increasing amounts of evidence showing that N-methyl-D-aspartate (NMDA) can be used to treat catatonic depression effectively as well. NMDA is an amino acid derivative that mimics the behavior of the glutamate neurotransmitter. Although it appears to be a promising treatment method, more studies are needed to address its effectiveness and side effects adequately.

Repetitive Transcranial Magnetic Stimulation (rTMS): Other treatments that have shown promise are repetitive transcranial magnetic stimulation (rTMS) and certain atypical antipsychotics, particularly those that block dopamine D2 receptors. However, more research is necessary to determine how effective these methods are in treating people with catatonic depression.