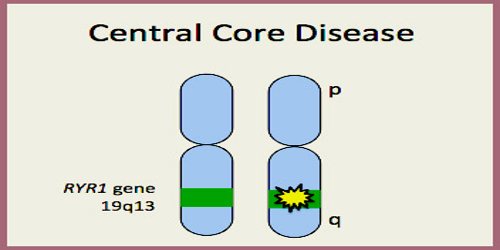 Central core disease (CCD) is a disorder that affects muscles used for movement (skeletal muscles). It is also known as central core myopathy. It was first described by Shy and Magee in 1956. It is characterized by the appearance of the myofibril under the microscope. It is a rare genetic neuromuscular disorder that is classified as a congenital myopathy, meaning that it is a muscle disorder (myopathy) that is present at birth (congenital). Affected infants have diminished muscle tone (hypotonia) resulting in abnormal “floppiness”, muscle weakness, and a variety of skeletal abnormalities such as side-to-side curvature of the spine (scoliosis).

Central core disease gets its name from disorganized areas called cores, which are found in the center of muscle fibers in many affected individuals. These abnormal regions can only be seen under a microscope. Although the presence of cores can help doctors diagnose central core disease, it is unclear how they are related to muscle weakness and the other features of this condition.

Central core disease is inherited in an autosomal dominant fashion. Most cases have demonstrable mutations in the ryanodine receptor type 1 (RYR1) gene, which are often de novo (newly developed). People with CCD are at risk for malignant hyperthermia (MH) when receiving general anesthesia. Most people with central core disease experience persistent, mild muscle weakness that does not worsen with time. This weakness affects the muscles near the center of the body (proximal muscles), particularly muscles in the upper legs and hips. Muscle weakness causes affected infants to appear “floppy” and can delay the development of motor skills such as sitting, standing, and walking. In severe cases, affected infants experience profoundly weak muscle tone (hypotonia) and serious or life-threatening breathing problems. Central core disease is also associated with skeletal abnormalities such as abnormal curvature of the spine (scoliosis), hip dislocation, and joint deformities called contractures that restrict the movement of certain joints.

Muscle weakness normally affects the proximal muscles, which are those muscles closest to the center of the body such as the muscles of the shoulder, pelvis and upper arms and legs. Affected infants may experience delays in acquiring motor milestones such as crawling or walking. Some individuals with CCD may be susceptible to developing malignant hyperthermia, a condition in which individuals develop adverse reactions to certain anesthetic drugs. CCD may be very mild or may cause serious complications.

The diagnosis is made on the combination of typical symptoms and the appearance on biopsy (tissue sample) from muscle. The name derives from the typical appearance of the biopsy on light microscopy, where the muscle cells have cores that are devoid of mitochondria and specific enzymes. There is no specific treatment but triggering anesthetics are avoided and relatives are screened for RYR1 mutations as these may make them susceptible to MH.