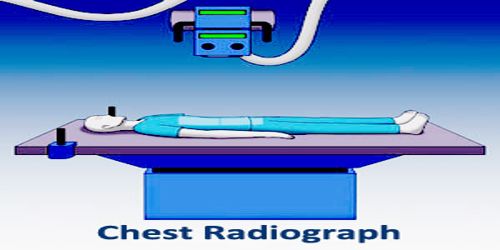 Chest radiograph, which is also called a chest X-ray (CXR), or chest film is a picture of the chest that shows our heart, lungs, airway, blood vessels, and lymph nodes. A chest X-ray also shows the bones of our spine and chest, including our breastbone, our ribs, our collarbone, and the upper part of our spine. A chest X-ray is the most common imaging test or X-ray used to find problems inside the chest. Chest radiographs are the most common film taken in medicine. Doctor could order a chest X-ray for a variety of reasons, including to assess injuries resulting from an accident or to monitor the progression of a disease, such as cystic fibrosis. People might also need a chest X-ray if they go to the emergency room with chest pain or if they have been involved in an accident that included force to their chest area.

A chest X-ray (or Chest radiographs) is an easy, quick, and effective test that has been useful for decades to help doctors view some of our most vital organs. The mean radiation dose to an adult from a chest radiograph is around 0.02 mSv (2 mrem) for a front view (PA or posterior-anterior) and 0.08 mSv (8 mrem) for a side view (LL or latero-lateral). Together, this corresponds to a background radiation equivalent time of about 10 days.

Performed and Views of Chest Radiographs

The X-ray (or Radiographs) occurs in a special room with a movable X-ray camera attached to a large metal arm. Patient will stand next to a “plate.” This plate may contain X-ray film or a special sensor that records the images on a computer. They will wear a lead apron to cover their genitals. This is because their sperm (men) and eggs (women) could be damaged from the radiation. While the images are taken, patient will need to hold their breath so that their chest stays completely still. If they move, the images might turn out blurry. As the radiation passes through their body and onto the plate, denser materials, such as bone and the muscles of their heart, will appear white. Different views, which is also known as projections of the chest can be obtained by changing the relative orientation of the body and the direction of the x-ray beam. The most common views are posteroanterior, anteroposterior, and lateral.

Required projections can vary by country and hospital, typically an erect postero-anterior (PA) projection is first preference, and if this is not possible then an antero-posterior view will be taken. Lateral decubitus may be used for visualization of air-fluid levels if an upright image cannot be obtained. Anteroposterior (AP) Axial Lordotic projects the clavicles above the lung fields, allowing better visualization of the apices, which is extremely useful when looking for evidence of primary tuberculosis. Some Common Uses of Chest Radiographs

The chest x-ray (or Chest Radiographs) is performed to evaluate the lungs, heart and chest wall.

A chest x-ray is typically the first imaging test used to help diagnose symptoms such as:

Physicians use the examination to help diagnose or monitor treatment for conditions such as:

Risk: There is always a slight chance of damage to cells or tissue from radiation, including the low levels of radiation used for this test. But the chance of damage from the X-rays is usually very low compared with the benefits of the test.