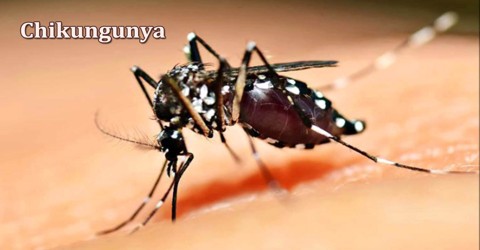 Chikungunya is an RNA virus and a member of the alphavirus genus of the Togaviridae family. The virus is passed on through bites of female mosquitoes that are infected. The mosquitoes may bite at any time but are most active outdoors during the early morning and late afternoon.  The incubation period can range greatly from 2 to 12 days, but the initial symptoms typically present 4 to 8 days after the infected mosquito bite. Diagnosis is by either testing the blood for the virus’s RNA or antibodies to the virus. The symptoms can be mistaken for those of dengue fever and Zika fever. After a single infection it is believed most people become immune. While the disease typically occurs in Africa and Asia, outbreaks have been reported in Europe and the Americas since the 2000s. In 2014 more than a million suspected cases occurred. In 2014 it was occurring in Florida in the continental United States but as of 2016 there was no further locally acquired cases. The disease was first identified in 1952 in Tanzania. The term is from the Kimakonde language and means “to become contorted”. Signs, Symptoms and Causes of Chikungunya

Chikungunya is characterized by an abrupt onset of fever frequently accompanied by joint pain. Other common signs and symptoms include muscle pain, headache, nausea, fatigue and rash. The joint pain is often very debilitating, but usually lasts for a few days or may be prolonged to weeks. Hence the virus can cause acute, subacute or chronic disease.

Most patients recover fully, but in some cases joint pain may persist for several months, or even years. Occasional cases of eye, neurological and heart complications have been reported, as well as gastrointestinal complaints. Serious complications are not common, but in older people, the disease can contribute to the cause of death. Often symptoms in infected individuals are mild and the infection may go unrecognized, or be misdiagnosed in areas where dengue occurs.

Chikungunya Virus (CHIKV) is a member of the alphavirus genus, and Togaviridae family. It is a member of the Semliki Forest virus complex and is closely related to Ross River virus, O’nyong’nyong virus, and Semliki Forest virus. Because it is transmitted by arthropods, namely mosquitoes, it can also be referred to as an arbovirus (arthropod-borne virus). It is generally transmitted from mosquitoes to humans. Less common modes of transmission include vertical transmission, which is transmission from mother to child during pregnancy or at birth. Transmission via infected blood products and through organ donation is also theoretically possible during times of outbreak, though no cases have yet been documented. Diagnosis, Treatment and Prevention of Chikungunya

To diagnose chikungunya serological tests may be required. For example, enzyme-linked immunosorbent assays (ELISA) can identify the presence of antibodies against the virus. This is most effective several weeks after illness onset, but can help to identify the disease in this time period.

A virological test, such as reverse transcriptase-polymerase chain reaction (RT-PRC), may be more useful in the first week of symptoms to detect the presence of the virus before antibodies have developed.

There is no vaccine to prevent or medicine to treat chikungunya virus. Treat the symptoms:

If people have chikungunya, prevent mosquito bites for the first week of their illness. The proximity of mosquito vector breeding sites to human habitation is a significant risk factor for chikungunya as well as for other diseases that these species transmit. Prevention and control relies heavily on reducing the number of natural and artificial water-filled container habitats that support breeding of the mosquitoes. This requires mobilization of affected communities. During outbreaks, insecticides may be sprayed to kill flying mosquitoes, applied to surfaces in and around containers where the mosquitoes land, and used to treat water in containers to kill the immature larvae.