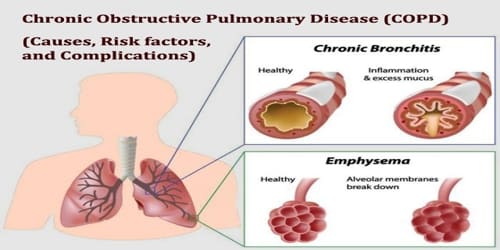 Definition: Chronic obstructive pulmonary disease, commonly known as COPD, is a chronic inflammatory lung disease that causes obstructed airflow from the lungs. This disease is characterized by increasing breathlessness. COPD is a progressive disease, meaning it typically worsens over time. Eventually, everyday activities, such as walking or getting dressed, become difficult.

People with COPD are at increased risk of developing heart disease, lung cancer and a variety of other conditions. The top cause of COPD is tobacco smoking. Long-term exposure to chemical irritants can also lead to COPD. It’s a disease that usually takes a long time to develop.

The main symptoms include shortness of breath and cough with sputum production. Chronic bronchitis and emphysema are older terms used for different types of COPD. The term “chronic bronchitis” is still used to define a productive cough that is present for at least three months each year for two years.

The word “emphysema” is derived from the Greek ἐμφυσᾶν emphysan meaning “inflate” -itself composed of ἐν en, meaning “in”, and φυσᾶν physan, meaning “breath, blast”. The term chronic bronchitis came into use in 1808 while the term COPD is believed to have first been used in 1965.

COPD is a progressive and (currently) incurable disease, but with the right diagnosis and treatment, there are many things people can do to manage their COPD and breathe better. People can live for many years with COPD and enjoy life. Causes and Risk factors of COPD: The primary cause of COPD is tobacco smoke, with occupational exposure and pollution from indoor fires being significant causes in some countries. Typically, these exposures must occur over several decades before symptoms develop. A person’s genetic makeup also affects the risk.

Only about 20 to 30 percent of chronic smokers may develop clinically apparent COPD, although many smokers with long smoking histories may develop reduced lung function. Some smokers develop less common lung conditions. They may be misdiagnosed as having COPD until a more thorough evaluation is performed.

Most people with COPD are at least 40 years old and have at least some history of smoking. The longer and more tobacco products people smoke, the greater their risk of COPD is. In addition to cigarette smoke, cigar smoke, pipe smoke, and secondhand smoke can cause COPD.

Poorly ventilated cooking fires, often fueled by coal or biomass fuels such as wood and dung, lead to indoor air pollution and are one of the most common causes of COPD in developing countries. People who live in large cities have a higher rate of COPD compared to people who live in rural areas. While urban air pollution is a contributing factor in exacerbations, its overall role as a cause of COPD is unclear.

There may be a genetic predisposition to developing COPD. Up to an estimated 5 percent of people with COPD have a deficiency in a protein called alpha-1-antitrypsin. This deficiency causes the lungs to deteriorate and also can affect the liver. There may be other associated genetic factors at play as well.

Risk factors for COPD include:

Birth factors such as low birth weight may also play a role, as do a number of infectious diseases, including HIV/AIDS and tuberculosis. Respiratory infections such as pneumonia do not appear to increase the risk of COPD, at least in adults. Complications of COPD: COPD is a type of obstructive lung disease in which chronic, incompletely reversible poor airflow (airflow limitation) and inability to breathe out fully (air trapping) exist.

COPD can cause many complications, including:

An acute exacerbation (a sudden worsening of symptoms) is commonly triggered by infection or environmental pollutants, or sometimes by other factors such as improper use of medications. Infections appear to be the cause of 50 to 75% of cases, with bacteria in 30%, viruses in 23%, and both in 25%.