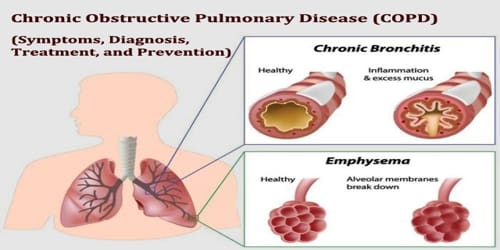 Definition: Chronic obstructive pulmonary disease, commonly known as ‘COPD’, is an umbrella term used to describe progressive lung diseases including emphysema, chronic bronchitis, and refractory (non-reversible) asthma. This disease is characterized by increasing breathlessness. Chronic bronchitis and emphysema are older terms used for different types of COPD. The term “chronic bronchitis” is still used to define a productive cough that is present for at least three months each year for two years.

The word “emphysema” is derived from the Greek ἐμφυσᾶν emphysan meaning “inflate” -itself composed of ἐν en, meaning “in”, and φυσᾶν physan, meaning “breath, blast”. The term chronic bronchitis came into use in 1808 while the term COPD is believed to have first been used in 1965.

Symptoms include breathing difficulty, cough, mucus (sputum) production and wheezing. It’s caused by long-term exposure to irritating gases or particulate matter, most often from cigarette smoke. People with COPD are at increased risk of developing heart disease, lung cancer and a variety of Tobacco smoking is the most common cause of COPD, with factors such as air pollution and genetics playing a smaller role. In the developing world, one of the common sources of air pollution is poorly vented heating and cooking fires other conditions. Most cases of COPD can be prevented by reducing exposure to risk factors. A person’s genetic makeup also affects the risk.

COPD is a progressive and (currently) incurable disease, but with the right diagnosis and treatment, there are many things people can do to manage their COPD and breathe better. People can live for many years with COPD and enjoy life. Signs and Symptoms of COPD: The most common symptoms of COPD are sputum production, shortness of breath, and a productive cough. These symptoms are present for a prolonged period of time and typically worsen over time. It is unclear whether different types of COPD exist.

Other signs and symptoms of COPD may include:

There are different types of COPD. Each type may affect how well different treatments work, how people’s symptoms affect their everyday life, and how they progress. If people have another health condition in addition to COPD (co-morbidity), such as high blood pressure, heart disease, heartburn, depression, or diabetes, this can also affect their COPD and how it is managed.

Diagnosis and Treatment of COPD: The diagnosis of COPD should be considered in anyone over the age of 35 to 40 who has shortness of breath, a chronic cough, sputum production, or frequent winter colds and a history of exposure to risk factors for the disease. There’s no single test for COPD. Diagnosis is based on symptoms, a physical exam, and diagnostic test results.

These tests can help determine if people have COPD or a different condition, such as asthma, a restrictive lung disease, or heart failure. Treatment can ease symptoms, prevent complications, and generally slow disease progression. The only measures that have been shown to reduce mortality are smoking cessation and supplemental oxygen. Stopping smoking decreases the risk of death by 18%. Other recommendations include influenza vaccination once a year, pneumococcal vaccination once every five years, and a reduction in exposure to environmental air pollution.

Bronchodilators are medications that help relax the muscles of the airways, widening the airways so people can breathe easier. They’re usually taken through an inhaler or a nebulizer. Glucocorticosteroids can be added to reduce inflammation in the airways.

If people’s blood oxygen level is too low, they can receive supplemental oxygen through a mask or nasal cannula to help you breathe better. A portable unit can make it easier to get around.

Surgery is an option for some people with some forms of severe emphysema who aren’t helped sufficiently by medications alone.

Preventions of COPD: Unlike some diseases, COPD has a clear cause and a clear path of prevention. The majority of cases are directly related to cigarette smoking, and the best way to prevent COPD is to never smoke — or to stop smoking now.

Most cases of COPD are potentially preventable through decreasing exposure to smoke and improving air quality. Annual influenza vaccinations in those with COPD reduce exacerbations, hospitalizations, and death. Pneumococcal vaccination may also be beneficial. The non-typable (unencapsulated) Haemophilus influenzae vaccine (NTHi) when taken by mouth does not appear to reduce severity or number of COPD exacerbations. Eating a diet high in beta-carotene may help but taking supplements does not seem to.