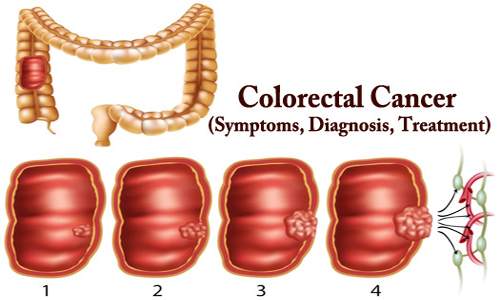 Colorectal Cancer (CRC), also known as bowel cancer, colon cancer, or rectal cancer, is a type of cancer that begins in the large intestine (colon). The colon is the final part of the digestive tract. A cancer is the abnormal growth of cells that have the ability to invade or spread to other parts of the body. Signs and symptoms may include blood in the stool, a change in bowel movements, weight loss, and feeling tired all the time.

The American Cancer Society estimate that about 1 in 21 men and 1 in 23 women in the United States will develop colorectal cancer during their lifetime. It is the second leading cause of cancer death in women, and the third for men. However, due to advances in screening techniques and improvements in treatments, the death rate from colorectal cancer has been falling.

Colon cancer typically affects older adults, though it can happen at any age. It usually begins as small, noncancerous (benign) clumps of cells called polyps that form on the inside of the colon. Over time some of these polyps can become colon cancers. Other risk factors include diet, obesity, smoking, and lack of physical activity. Dietary factors that increase the risk include red meat, processed meat, and alcohol. Another risk factor is inflammatory bowel disease, which includes Crohn’s disease and ulcerative colitis. Some of the inherited genetic disorders that can cause colorectal cancer include familial adenomatous polyposis and hereditary non-polyposis colon cancer; however, these represent less than 5% of cases. It typically starts as a benign tumor, often in the form of a polyp, which over time becomes cancerous.

According to WHO (World Health Organization), colorectal cancer is the second most common tumor among both men and women, after lung tumors. Around 2 percent of people aged over 50 years will eventually develop colorectal cancer in Western Europe.

Colorectal cancer tends to affect men and women equally. However, men tend to develop it at a younger age. Many treatments are available to help control it, including surgery, radiation therapy and drug treatments, such as chemotherapy, targeted therapy, and immunotherapy.

The signs and symptoms of colorectal cancer depend on the location of the tumor in the bowel, and whether it has spread elsewhere in the body (metastasis). The classic warning signs include: worsening constipation, blood in the stool, decrease in stool caliber (thickness), loss of appetite, loss of weight, and nausea or vomiting in someone over 50 years old. Around 50% of individuals with colorectal cancer do not report any symptoms. 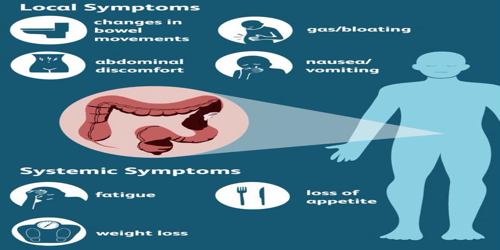 Symptoms of colorectal cancer include:

Most of these symptoms may also indicate other possible conditions. It is important to see a doctor if symptoms persist for 4 weeks or more. Rectal bleeding or anemia are high-risk symptoms in people over the age of 50. Weight loss and changes in a person’s bowel habit are typically only concerning if they are associated with rectal bleeding.

Several screening options exist each with its own benefits and drawbacks. Talk about patients options with their doctor, and together they can decide which tests are appropriate for them. If a colonoscopy is used for screening, polyps can be removed during the procedure before they turn into cancer. 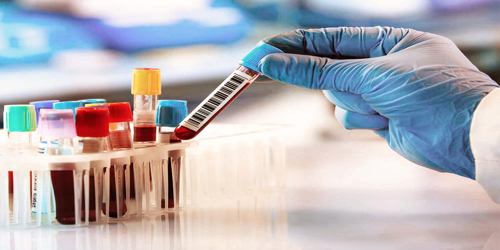 Medical imaging – A colorectal cancer is sometimes initially discovered on CT scan. Presence of metastases is determined by a CT scan of the chest, abdomen, and pelvis. Other potential imaging tests such as PET and MRI may be used in certain cases. The latter is often used for rectal lesions to determine its local stage and to facilitate preoperative planning.

Fecal occult blood test (blood stool test) – This checks a sample of the patient’s stool (feces) for the presence of blood. This can be done at the doctor’s office or with a kit at home. The sample is returned to the doctor’s office, and it is sent to a laboratory.

A blood stool test is not 100-percent accurate, because not all cancers cause a loss of blood, or they may not bleed all the time. Therefore, this test can give a false negative result. Blood may also be present because of other illnesses or conditions, such as hemorrhoids. Some foods may suggest blood in the colon, when in fact, none was present.

Flexible sigmoidoscopy – The doctor uses a sigmoidoscope, a flexible, slender and lighted tube, to examine the patient’s rectum and sigmoid. The sigmoid colon is the last part of the colon, before the rectum. The test takes a few minutes and is not painful, but it might be uncomfortable. There is a small risk of perforation of the colon wall.

If the doctor detects polyps or colon cancer, a colonoscopy can then be used to examine the entire colon and take out any polyps that are present. These will be examined under a microscope. A sigmoidoscopy will only detect polyps or cancer in the end third of the colon and the rectum. It will not detect a problem in any other part of the digestive tract.

Histopathology – The histopathologic characteristics of the tumor are reported from the analysis of tissue taken from a biopsy or surgery. A pathology report contains a description of the microscopical characteristics of the tumor tissue, including both tumor cells and how the tumor invades into healthy tissues and finally if the tumor appears to be completely removed. The most common form of colon cancer is adenocarcinoma, constituting between 95% to 98% of all cases of colorectal cancer. Other, rarer types include lymphoma, adenosquamous and squamous cell carcinoma. Some subtypes have been found to be more aggressive. Immunohistochemistry may be used in uncertain cases.

Colonoscopy – A colonoscope is longer than a sigmoidoscope. It is a long, flexible, slender tube, attached to a video camera and monitor. The doctor can see the whole of the colon and rectum. Any polyps discovered during this exam can be removed during the procedure, and sometimes tissue samples, or biopsies, are taken instead.

A colonoscopy is painless, but some patients are given a mild sedative to calm them down. Before the exam, they may be given laxative fluid to clean out the colon. An enema is rarely used. Bleeding and perforation of the colon wall are possible complications, but extremely rare.

Staging – Staging of the cancer is based on both radiological and pathological findings. As with most other forms of cancer, tumor staging is based on the TNM system which considers how much the initial tumor has spread and the presence of metastases in lymph nodes and more distant organs. The AJCC 8th edition was published in 2018.

Treatment for colorectal cancer or colon cancer usually involves surgery to remove the cancer. Other treatments, such as radiation therapy and chemotherapy, might also be recommended.

Surgery for Colorectal cancer: This is the most common treatment. The affected malignant tumors and any nearby lymph nodes will be removed, to reduce the risk of the cancer spreading. The bowel is usually sewn back together, but sometimes the rectum is removed completely and a colostomy bag is attached for drainage. The colostomy bag collects stools. This is usually a temporary measure, but it may be permanent if it is not possible to join up the ends of the bowel.

If the cancer is diagnosed early enough, surgery may successfully remove it. If surgery does not stop the cancer, it will ease the symptoms.

Chemotherapy might also be used before an operation to shrink a large cancer so that it’s easier to remove with surgery.

Chemotherapy can also be used to relieve symptoms of colon cancer that can’t be removed with surgery or that has spread to other areas of the body. Sometimes it’s combined with radiation therapy.

Radiation therapy: Radiation therapy uses high energy radiation beams to destroy the cancer cells and to prevent them from multiplying. This is more commonly used for rectal cancer treatment. It may be used before surgery in an attempt to shrink the tumor. Both radiation therapy and chemotherapy may be given after surgery to help lower the chances of recurrence.

Immunotherapy: Immunotherapy with immune checkpoint inhibitors has been found to be useful for a type of colorectal cancer with mismatch repair deficiency and microsatellite instability. Pembrolizumab is approved for advanced CRC tumours that are MMR deficient and have failed usual treatments. Most people who do improve, however, still worsen after months or years. Other types of colorectal cancer as of 2017 is still being studied.

Ablation: Ablation can destroy a tumor without removing it. It can be carried out using radiofrequency, ethanol, or cryosurgery. These are delivered using a probe or needle that is guided by ultrasound or CT scanning technology.

Follow-up: The aims of follow-up are to diagnose, in the earliest possible stage, any metastasis or tumors that develop later, but did not originate from the original cancer (metachronous lesions). Routine PET or ultrasound scanning, chest X-rays, complete blood count or liver function tests are not recommended.

For people who have undergone curative surgery or adjuvant therapy (or both) to treat non-metastatic colorectal cancer, intense surveillance and close follow-up have not been shown to provide additional survival benefits.

Supportive (palliative) care: Palliative care is recommended for any person who has advanced colon cancer or who has significant symptoms. Palliative care is provided by a team of doctors, nurses and other specially trained professionals that work with patients, theirs family and their other doctors to provide an extra layer of support that complements their ongoing care. Palliative care teams aim to improve the quality of life for people with cancer and their families. This form of care is offered alongside curative or other treatments patients may be receiving.

When palliative care is used along with all of the other appropriate treatments, people with cancer may feel better and live longer.

A number of lifestyle measures may reduce the risk of developing colorectal cancer: