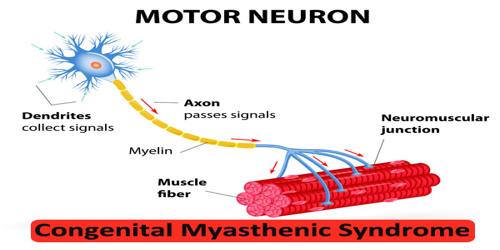 Congenital myasthenic syndrome (CMS) is a group of conditions characterized by muscle weakness (myasthenia) that worsens with physical exertion. It is an inherited neuromuscular disorder caused by defects of several types at the neuromuscular junction. The effects of the disease are similar to Lambert-Eaton Syndrome and myasthenia gravis, the difference being that CMS is not an autoimmune disorder. There are several types of CMS and symptoms range widely. Symptoms include weakness, especially of the eye, mouth, and throat that may worsen with activity, droopy eyelids (ptosis), curvature of the spine (scoliosis), and feeding and respiratory problems, and symptoms begin most often after birth or before adolescence. It can improve after severe symptoms appear at birth but may worsen late in adulthood.

Congenital myasthenic syndrome (CMS) is associated with genetic defects that affect proteins of the neuromuscular junction. Postsynaptic defects are the most frequent cause of CMS and often result in abnormalities in the acetylcholine receptor (AChR). In the neuromuscular junction there is a vital pathway that maintains synaptic structure and results in the aggregation and localization of AChR on the postsynaptic folds. This pathway consists of agrin, muscle-specific tyrosine kinase (MuSK), acetylcholine receptors (AChRs) and the AChR-clustering protein rapsyn, encoded by the RAPSN gene. The vast majority of mutations causing CMS are found in the AChR subunits and rapsyn genes.

Congenital myasthenic syndromes are rare hereditary (genetic) conditions resulting from a defect at the junction where patient’s nerve stimulates muscle activity. That defect causes muscle weakness. CMSs may affect their nerve cells (presynaptic), their muscle cells (postsynaptic), or the space between their nerve and muscle cells (synaptic).

CMS usually have a congenital (at or near birth) onset, but the disease can manifest in children and even in adults. The different types vary in the kind and degree of symptoms, but generally speaking, the earlier the symptoms appear, the more pronounced the disease is likely to be. The types of CMS are classified into three categories: presynaptic, postsynaptic, and synaptic.

Onset symptoms for all ages may include droopy eyelids. A particular form of postsynaptic CMS (slow-channel CMS) includes severe weakness beginning in infancy or childhood that progresses and leads to loss of mobility and respiratory problems in adolescence or later life. Treatment for CMS generally involves one of a few drugs. Cholinesterase inhibitors, such as Mestinon, increase the effectiveness of the acetylcholine neurotransmitter by blocking acetylcholinesterase, a chemical that cleans up acetylcholine after it has been released into the synapse. 3,4-diaminopyridine (3,4-DAP) increases the amount of acetylcholine released during a nerve impulse by prolonging the presynaptic action potential.

CMS is “often difficult to diagnose because of a broad differential diagnosis and lack of specific laboratory findings. Identification of the underlying mutation is critical, as certain mutations lead to treatment-responsive conditions while others do not.” Whole exome sequencing (WES) is often used as a diagnostic tool that allows for the “initiation of specific treatment”.