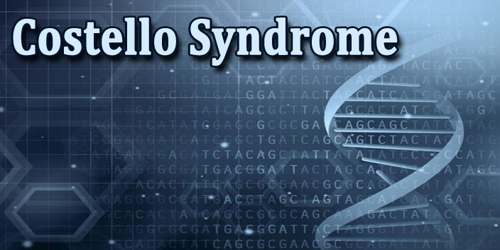 Costello syndrome is a disorder that affects many parts of the body. Its condition is characterized by delayed development and intellectual disability, loose folds of skin which are especially noticeable on the hands and feet, unusually flexible joints, and distinctive facial features including a large mouth. Heart abnormalities are common, including a very fast heartbeat (tachycardia), structural heart defects, and overgrowth of the heart muscle (hypertrophic cardiomyopathy). Infants with Costello syndrome may be large at birth, but grow more slowly than other children and have difficulty feeding. Costello Syndrome was discovered by Dr Jack Costello, a New Zealand Paediatrician in 1977. He is credited with first reporting the syndrome in the Australian Paediatric Journal, Volume 13, No.2 in 1977.

Infants with Costello syndrome may be larger than average at birth, but most have difficulty feeding and grow more slowly than other children. People with this condition have relatively short stature and may have reduced growth hormone levels.

Costello syndrome, also known as faciocutaneoskeletal (FCS) syndrome is thought to affect 200 to 300 people worldwide, but more cases may remain undiagnosed. It is a genetic disorder resulting from mutations in the HRAS gene. This is the gene that instructs the body to produce a protein known as H-Ras. H-Ras aids cell growth and division.

HRAS is a proto-oncogene in which somatic mutations in healthy people can contribute to cancer. Whereas children with Costello syndrome typically have a mutation in HRAS in every cell of their bodies, an otherwise healthy person with a tumor caused in part by HRAS mutation will only have mutant HRAS within the tumor. The test for the mutation in cancer tumors can also be used to test children for Costello syndrome. The signs and symptoms of Costello syndrome overlap significantly with those of two other genetic conditions, cardiofaciocutaneous syndrome (CFC syndrome) and Noonan syndrome. In affected infants, it can be difficult to tell the three conditions apart based on their physical features. However, the conditions can be distinguished by their genetic cause and by specific patterns of signs and symptoms that develop later in childhood.

Most of the signs of Costello syndrome are not noticeable at birth, but they appear as a child starts to grow. Birth weight is usually normal or a little above average, but the infant will grow more slowly than most children. Diagnosis and Treatment of Costello Syndrome

Costello syndrome is very rare, so it is unlikely that a doctor would suspect it at once. A physician will start by assessing the child’s height, the size of the head, and birth weight. The next stage involves molecular genetic testing. Sequence analysis is carried out on the HRAS gene to see if there is a mutation that relates to Costello syndrome.

There is no cure for Costello syndrome, nor any specific treatment, but aspects of the syndrome, for example, the heart conditions, hypertrophic cardiomyopathy, can be treated specifically.