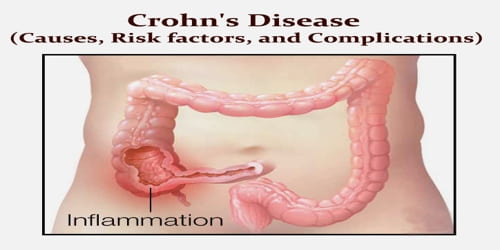 Signs and symptoms often include abdominal pain, diarrhea (which may be bloody if inflammation is severe), fever, and weight loss. Other complications may occur outside the gastrointestinal tract and include anemia, skin rashes, arthritis, inflammation of the eye, and tiredness.

Crohn’s disease most commonly occurs in the small intestine and the colon. However, the disease can affect any part of our gastrointestinal (GI) tract, from our mouth to our anus. The disease can involve some parts of the GI tract and skip other parts.

The range of severity can be from mild to debilitating. The symptoms vary and can change over time. In some people, the disease can lead to life-threatening flares and complications.

Crohn’s disease affects about 3.2 per 1,000 people in Europe and North America. It is less common in Asia and Africa. It has historically been more common in the developed world. The disease was named after gastroenterologist Burrill Bernard Crohn, who, in 1932, together with two other colleagues at Mount Sinai Hospital in New York, described a series of patients with inflammation of the terminal ileum of the small intestine, the area most commonly affected by the illness. Causes and Risk factors of Crohn’s disease: While its exact causes are unknown, what is known is that Crohn’s disease is a chronic, or ongoing, inflammatory bowel disease (IBD) that primarily affects the digestive or gastrointestinal (GI) tractCollectively referring to the mouth, esophagus, stomach, small and large intestines, and anus.

Scientists believe that Crohn’s disease is caused by a combination of these factors:

Foreign substances (antigens) in the environment may also be a cause of inflammation, or they may stimulate the body’s defenses to produce inflammation that continues without control.

Risk factors for Crohn’s disease may include:

Crohn’s disease is a chronic condition for which there is no known cure. It is characterized by periods of improvement followed by episodes when symptoms flare up. With treatment, most people achieve a healthy weight, and the mortality rate for the disease is relatively low. Complications of Crohn’s disease: Crohn’s disease can lead to several mechanical complications within the intestines, including obstruction, fistulae, and abscesses. Obstruction typically occurs from strictures or adhesions that narrow the lumen, blocking the passage of the intestinal contents. A fistula can develop between two loops of bowel, between the bowel and bladder, between the bowel and vagina, and between the bowel and skin. Abscesses are walled off concentrations of infection, which can occur in the abdomen or in the perianal area. Crohn’s is responsible for 10% of vesicoenteric fistulae and is the most common cause of ileovesical fistulae.

Crohn’s disease can cause problems in other parts of the body. Among these problems are anemia, skin disorders, osteoporosis, arthritis, and gallbladder or liver disease. Medication risks. Certain Crohn’s disease drugs that act by blocking functions of the immune system are associated with a small risk of developing cancers such as lymphoma and skin cancers. They also increase the risk of infection.