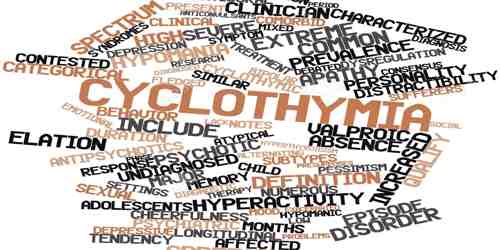 Cyclothymia is a condition characterized by periodical swings of mood between excitement and depression, activity and inactivity, which is also called cyclothymic disorder. The low and high mood swings never reach the severity or duration of major depressive or full mania episodes. People with cyclothymic disorder have milder symptoms than occur in full-blown bipolar disorder. Hypomania involves periods of elevated mood, euphoria, and excitement but does not disconnect a person from reality. A person with cyclothymia experiences symptoms of hypomania but no full-blown manic episodes. Hypomania may feel good to the person who experiences it and may lead to enhanced functioning and productivity. Thus, even when family and friends learn to recognize the mood swings as possible bipolar disorder, the person may deny that a problem exists. Without proper treatment, however, hypomania can become severe mania or can turn into depression.

It is estimated that the rate of occurrence of cyclothymia in the general population is between 0.4% to 1%, with it equally affecting men and women. Though, women are more likely to seek treatment. While typical onset of the disorder occurs during adolescence, its onset is consistently hard to identify. Risk of suffering from Attention-Deficient/Hyperactivity Disorder, substance abuse, and sleep disorders are elevated among individuals suffering from cyclothymic disorder.

The causes of cyclothymia are unknown, but there is probably a genetic link – cyclothymia, clinical depression and bipolar disorder all tend to run in families.

In some people, traumatic events or experiences may act as a trigger for the condition, such as severe illness or long periods of stress. Cyclothymia usually begins early in life and is equally common in both men and women. Hypomanic periods are energizing and can result in productivity for some people, while for others these periods can cause impulsive and callous behavior, which can damage relationships. Because hypomania feels good, people with cyclothymia may not seek treatment.

In cyclothymia, moods fluctuate from mild depression to hypomania and back again. In most people, the pattern is irregular and unpredictable. Hypomania or depression can last for days or weeks. In between up and down moods, a person might have normal moods for more than a month or may cycle continuously from hypomanic to depressed, with no normal period in between. Diagnosis and Treatments of Cyclothymia

A person does not have cyclothymia if they feel symptom-free for more than two months. To distinguish cyclothymia from regular moodiness, doctor will compare patient’s symptoms to the following clinical criteria:

Lab tests may also be performed to rule out other medical conditions that may be causing the symptoms.

Treatment for cyclothymia is similar to treatment for bipolar I disorder and bipolar II disorder. The level of treatment is dependent on the severity of symptoms. No medicines have been specifically approved for use in treating cyclothymia, but mood-stabilising medication and/or antidepressants have been used in practice and may be helpful, along with psychotherapy.

Recently, some antipsychotics such as quetiapine have also been used as mood stabilisers.

However, not all people with cyclothymia respond to medication. Psychotherapy, such as cognitive behavioural therapy (CBT), can be effective.