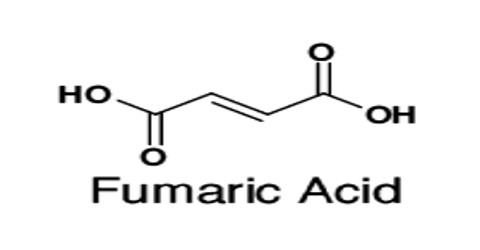 Fumaric Acid has been used as a food acidulent since 1946. Fumaric Acid esters were first introduced in the late 1950’s by the German chemist Schweckendiek in the treatment of psoriasis. A standardized “Fumaric Acid” protocol for psoriasis was developed and used FAEs both orally and topically. Applications for the chemical compound then expanded to industrial uses.

Fumaric acid is produced naturally by the body. In addition, fumaric acid is available as a dietary supplement to be consumed orally and as a preparation to be applied topically. Only esterified forms of fumaric should be used, and only after consulting with a dermatologist. Fumaric Acid is a non-toxic food additive generally used in beverages and baking powders for which requirements are based on purity. It is a substitute for tartaric acid and occasionally takes the place of citric acid, at a rate of 1.36 gram of citric acid to every 0.91 grams of Fumaric Acid for the same taste. It is also an essential ingredient in the manufacturing of candy to add sourness, similar to the way malic acid is used. Fumaric acid is used in the manufacture of polyester resins and polyhydric alcohols and as a mordant for dyes. Since the early 21st century, it has been used to synthesize one of the first metal-organic frameworks presenting commercial applications thanks to its remarkable adsorption and mechanical properties, combined with a low toxicity compared to other well-studied MOFs.

Fumaric acid’s hydrophobic nature results in persistent, long lasting sourness and flavour impact. In food and beverage products with a pH greater than 4.5, Fumaric acid decreases the pH with minimal added sourness. It has more buffering capacity than other food acids at pHs near 3.0 – this is due to its pKa1 and to its low molecular weight.

Fumaric acid absorbs virtually no atmospheric moisture – it stays dry and free flowing. Dry-mix products will not cake or harden, even during high humidity storage conditions, when Fumaric acid is used as the acidulant.