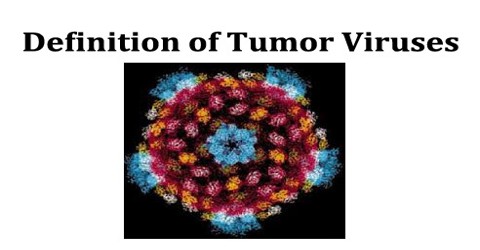 Tumor viruses are those viruses that are able to infect cells and cause changes within the cell’s operating machinery such that the cell’s ability to regulate its growth and division is destroyed and the cells become cancerous. Viruses associated with tumors can be classified in two broad categories depending on the nucleic acid in the viral genome and the type of strategy to induce malignant transformation.

There are two classes of tumor viruses:

DNA viruses replicate lytically and kill the infected cells. Transformation occurs in nonpermissive cells where the infection cannot proceed to viral replication. The transforming ability of DNA tumor viruses has been traced to several viral proteins that cooperate to stimulate cell proliferation, overriding some of the normal growth control mechanisms in the infected cell and its progeny. DNA tumor viruses belong to the families of papilloma, polyoma, adeno, hepadna, and herpes viruses and produce tumors of different types in various species. DNA tumor viruses are thought to play a role in the pathogenesis of about 15–20% of human cancers. These include Burkitt’s lymphoma, nasopharyngeal carcinoma, immunoblastic lymphomas in immunosuppressed individuals and a proportion of Hodgkin’s lymphomas that are all associated with the Epstein-Barr virus of the herpes family; and liver carcinoma associated with chronic hepatitis B virus infection.

The first DNA tumor viruses to be discovered were rabbit fibroma virus and Shope papilloma virus, both discovered by Richard Shope in the 1930s. Papillomas are benign growths, such as warts, of epithelial cells. They were discovered by making a filtered extract of a tumor from a wild rabbit and injecting the filtrate into another rabbit in which a benign papilloma grew. However, when the filtrate was injected into a domestic rabbit, the result was a carcinoma, that is a malignant growth. A seminal observation was that it was no longer possible to isolate infectious virus from the malignant growth. This was because the virus had become integrated into the chromosomes of the malignant cells.

The ribonucleic acid (RNA) tumor viruses are retroviruses. When they infect cells, the viral RNA is copied into deoxyribonucleic acid (DNA) by reverse transcription and the DNA is inserted into the host genome, where it persists and can be inherited by subsequent generation of cells. Transformation of the infected cells can be traced to oncogenes that are carried by the viruses but are not necessary for viral replication. The viral oncogenes are closely similar to cellular genes, the proto-oncogenes, which code for components of the cellular machinery that regulates cell proliferation, differentiation, and death. Retroviruses may also exert similar oncogenic effects by insertional mutation when DNA copies of the viral RNA are integrated into the host-cell genome at a site close to or even within proto-oncogenes. RNA tumor viruses cause leukemias, lymphomas, sarcomas, and carcinomas in fowl, rodents, primates, and other species. The human T-cell leukemia virus (HTLV) types I and II are endemic in Southeast Asian populations and cause adult T-cell leukemia and hairy-cell leukemia.

If a virus takes up residence in a cell and alters the properties of that cell, the cell is said to be transformed. Transformation by a virus is the change in the biological properties of a cell that results from the regulation of the cell by viral genes and that confer on the infected cells certain properties of neoplasia.

Transformation often includes loss of growth control, anchorage-independent growth, and ability to invade extracellular matrix, dedifferentiation and immortalization. In carcinomas, many epithelial cells undergo an epithelial-mesenchymal transformation. Transformed cells often exhibit chromosomal aberrations and the changes seen in transformation often, but not always, result from the integration of the viral genome into the host cell’s chromosomes.