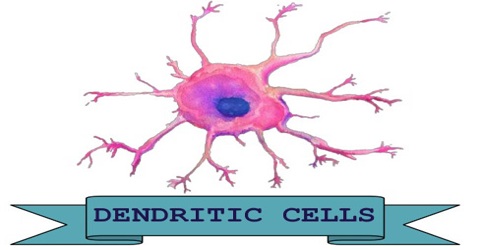 Dendritic Cell and Its Role in Adaptive Immunity

Dendritic Cell and Its Role in Adaptive Immunity Dendritic cells (DCs) are a heterogenous population of antigen-presenting cells that have crucial roles in promoting both pro- and anti-inflammatory immune responses. They monitor the body’s tissues and can integrate multiple signals from the environment in order to initiate an appropriate adaptive immune response. Inflammatory signals promote DC activation and their migration to draining lymphoid tissues to prime effector T cell responses. However, in the steady state, DCs promote tissue homeostasis by supporting the induction of regulatory T cells.

Dendritic cells are present in those tissues that are in contact with the external environment, such as the skin, where there is a specialized dendritic cell type called the Langerhans cell and the inner lining of the nose, lungs, stomach and intestines.

Dendritic cells were first described by Paul Langerhans (hence “Langerhans cells”) in the late nineteenth century. The term “dendritic cells” was coined in 1973 by Ralph M. Steinman and Zanvil A. Cohn. For discovering the central role of dendritic cells in the adaptive immune response, Steinman was awarded the Albert Lasker Award for Basic Medical Research in 2007 and the Nobel Prize in Physiology or Medicine in 2011. The second category of DC function is not as well established, but it has been suggested that a different class of DCs exist with the function of inducing and maintaining immune tolerance.

The third category of DCs, known as follicular DCs, appears to work to maintain immune memory in tandem with B cells.

Another approach is to generate DC-like cells by culturing CD14+ monocyte-enriched PBMC. In the presence of GM-CSF and IL-4, these cultures give rise to large numbers of DC like cells.

A novel approach to expand DCs in vivo is presented in a review by Fong and Engleman. They saw an increase in circulating DCs by 10-30 fold in a clinical protocol using Flt3-ligand. These cells could be harvested with a leukapheresis procedure and used for later immunotherapy. Other molecules may also prove useful for the in vivo expansion and mobilization of DCs. Every time that we breathe, eat, drink or get injured, microorganisms are infiltrating our bodies. Some keep us healthy, living within us through mutual benefit. Some are rather more determined to eat our tissues, and some (e.g.viruses) will hijack our cells in order to carry out their own agenda. In addition, as many of our cells continually divide, mutations do accumulate and malignancies will proliferate if left unchecked, and all of these biological threats would very soon kill each and every one of us if it were not for the vigilance and effectiveness of our immune systems.

One of the biggest recent steps taken toward this goal has to do with the understanding of how the entire system interacts, which, inevitably, involves the crucial links between innate and adaptive immunity.

In many ways, dendritic cells are similar to macrophages, but they are more specialized to provide specific pathogenic information to other immune cells that reside within the lymphatic organs. Once a dendritic cell makes contact with and detects specific patterns on the surface of a pathogen, it ingests, breaks down, and presents pieces of foreign proteins at its own surface within membrane receptors called Major Histocompatibility Complex (MHC) molecules. When an infection becomes severe enough, the local macrophage population gets overwhelmed, and therefore cannot fight the infection alone. They call in the cavalry.