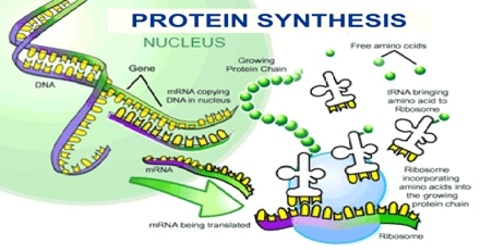 Protein Synthesis is the process by which amino acids are linearly arranged into proteins through the involvement of ribosomal RNA, transfer RNA, messenger RNA, and various enzymes. It is one of the most fundamental biological processes by which individual cells build their specific proteins. Within the process are involved both DNA (deoxyribonucleic acid) and different in their function ribonucleic acids (RNA). The process is initiated in the cell’s nucleus, where specific enzymes unwind the needed section of DNA, which makes the DNA in this region accessible and a RNA copy can be made. This RNA molecule then moves from the nucleus to the cell cytoplasm, where the actual the process of protein synthesis take place. The actual process of protein synthesis takes place in the cell cytoplasm, and it occurs on multiple ribosomes simultaneously. In protein synthesis, a succession of tRNA molecules charged with appropriate amino acids are brought together with an mRNA molecule and matched up by base-pairing through the anti-codons of the tRNA with successive codons of the mRNA. The amino acids are then linked together to extend the growing protein chain, and the tRNAs, no longer carrying amino acids, are released. This whole complex of processes is carried out by the ribosome, formed of two main chains of RNA, called ribosomal RNA (rRNA), and more than 50 different proteins. The ribosome latches onto the end of an mRNA molecule and moves along it, capturing loaded tRNA molecules and joining together their amino acids to form a new protein chain.

The process of protein synthesis takes place in multiple ribosomes simultaneous and all throughout the cell cytoplasm. A living cell can synthesize hundreds of different proteins every single second. Protein is key to such reactions as metabolism, DNA replication and molecule transportation. They are also key in making sure the human body reacts properly to stimuli. Proteins do not exist for extended periods of time, which is why they need to constantly be recreated and taken in as part of a balanced diet. The proteins eventually degrade or are exported out of the cells. If the human body did not get enough protein then it would not be able to replicate DNA, which means that the body would not be able to heal itself, reproduce or grow as needed. Each protein has a unique amino acid sequence, which is given to it by the gene that encodes it.

Protein Synthesis is very important because the proteins created during this process control the activities of the cells. Without these proteins, many of the processes in the body would fail or not work properly. The DNA in each cell holds the instructions on how to make the protein, which is why every cell in the body must have a copy of the DNA. Protein synthesis, or protein biosynthesis, is a process by which cells create new proteins in order to replace those lost through degeneration and transportation. Each protein, by definition, requires a specific chain of amino acids bound together. This takes place by assembling each protein by ribosomes. There are three types of RNA, or ribonucleic acid, which carry out this function: messenger RNA (mRNA), transfer RNA (tRNA) and ribosomal RNA (rRNA). There are 20 different types of tRNA, one specific to each type of amino acid. Every tRNA molecule has its associated amino acid attached to the end of it. The tRNA helps the amino acid join the chain by recognizing and binding it to the proper codon. It then decodes the related mRNA molecule in order to translate the DNA sequence into a complete protein. In transcription an mRNA chain is generated, with one strand of the DNA double helix in the genome as a template. This strand is called the template strand. Transcription can be divided into 3 stages: initiation, elongation, and termination, each regulated by a large number of proteins such as transcription factors and coactivators that ensure that the correct gene is transcribed.