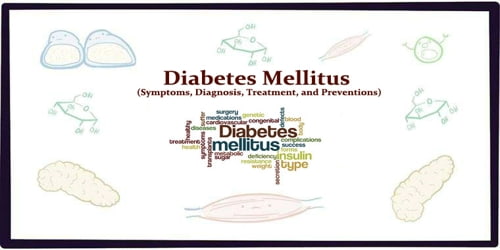 Definition: Diabetes mellitus (DM), commonly referred to as diabetes, is a common disease where there is too much sugar (glucose) floating around in our blood. This occurs because either the pancreas can’t produce enough insulin or the cells in our body have become resistant to insulin.

Diabetes is a major cause of morbidity and mortality, though these outcomes are not due to the immediate effects of the disorder. They are instead related to the diseases that develop as a result of chronic diabetes mellitus.

There are two main types of diabetes (diabetes mellitus): Type 1 and Type 2 diabetes.

Other types of diabetes might result from pregnancy (gestational diabetes), surgery, use of certain medicines, various illnesses, and other specific causes. Signs and Symptoms of Diabetes mellitus (DM): The classic symptoms of untreated diabetes are unintended weight loss, polyuria (increased urination), polydipsia (increased thirst), and polyphagia (increased hunger). Symptoms may develop rapidly (weeks or months) in type 1 DM, while they usually develop much more slowly and may be subtle or absent in type 2 DM.

The symptoms of diabetes include:

People (usually with type 1 DM) may also experience episodes of diabetic ketoacidosis (DKA), a metabolic disturbance characterized by nausea, vomiting, and abdominal pain, the smell of acetone on the breath, deep breathing known as Kussmaul breathing, and in severe cases a decreased level of consciousness.

A rare but equally severe possibility is the hyperosmolar hyperglycemic state (HHS), which is more common in type 2 DM and is mainly the result of dehydration. According to the current definition, two fasting glucose measurements above 7.0 mmol/l (126 mg/dl) is considered diagnostic for diabetes mellitus.

Treatment for diabetes mellitus is aimed at reducing blood glucose concentrations to normal levels. The only effective treatment in type 1 diabetes is administering insulin as these patients no longer produce it. Newer treatment regimens include the use of an insulin pump where blood glucose levels are entered into a machine which then uses an algorithm to pump insulin into the body.

There are several classes of oral drugs used to control blood glucose levels, including sulfonylureas, biguanides, and thiazolidinediones. Preventions of Diabetes mellitus (DM): There is no known preventive measure for type 1 diabetes. Type 2 diabetes – which accounts for 85–90% of all cases – can often be prevented or delayed by maintaining a normal body weight, engaging in physical activity, and consuming a healthy diet. Higher levels of physical activity (more than 90 minutes per day) reduce the risk of diabetes by 28%.

Diabetes is a serious and costly disease which is becoming increasingly common, especially in developing countries and disadvantaged minorities. However, there are ways of preventing it and/or controlling its progress. Public and professional awareness of the risk factors for and symptoms of diabetes is an important step towards its prevention and control.