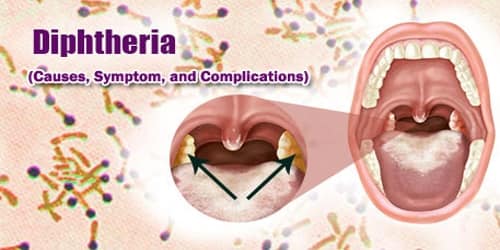 Definition: Diphtheria is a serious bacterial infection, caused by the bacterium Corynebacterium diphtheria, which affects the mucous membranes of the throat and nose. Diphtheria typically causes a sore throat, fever, swollen glands and weakness. But the hallmark sign is a sheet of thick, gray material covering the back of people’s throat, which can block their airway, causing them to struggle for breath.

The diphtheria toxin causes a membrane of dead tissue to build up over the throat and tonsils, making breathing and swallowing difficult. The disease is spread through direct physical contact or from breathing in the aerosolized secretions from coughs or sneezes of infected individuals.

Diagnosis can often be made based on the appearance of the throat with confirmation by microbiological culture. The previous infection may not protect against future infection.

Overall, 5 to 10 percent of people who get infected with diphtheria will die. Some people are more vulnerable than others, with a mortality rate of up to 20 percent in infected people under 5 years or older than 40 years of age. Causes, Sign, and Symptom of Diphtheria: A type of bacteria called Corynebacterium diphtheriae causes diphtheria. The condition is typically spread through person-to-person contact or through contact with objects that have the bacteria on them, such as a cup or used tissue. Other Corynebacterium species can be responsible, but this is rare.

Some strains of this bacterium produce a toxin, and it is this toxin that causes the most serious complications of diphtheria. The bacteria produce a toxin because they themselves are infected by a certain type of virus called a phage.

The toxin that is released:

In some cases, these toxins can also damage other organs, including the heart, brain, and kidneys. This can lead to potentially life-threatening complications, such as:

People who have been infected by the diphtheria bacteria and who haven’t been treated can infect nonimmune people for up to six weeks — even if they don’t show any symptoms.

Diphtheria signs and symptoms usually begin two to five days after a person becomes infected and may include:

Within two to three days, diphtheria may destroy healthy tissues in the respiratory system. The dead tissue forms a thick, gray coating that can build up in the throat or nose. This thick gray coating is called a “pseudomembrane.” Symptoms can also include cardiac arrhythmias, myocarditis, and cranial and peripheral nerve palsies. Complications of Diphtheria: Potentially life-threatening complications can occur if the toxin enters the bloodstream and damages other vital tissues.

Left untreated, diphtheria can lead to:

With treatment, most people with diphtheria survive these complications, but recovery is often slow. Diphtheria is fatal in as many as 3 percents of those who get the disease.