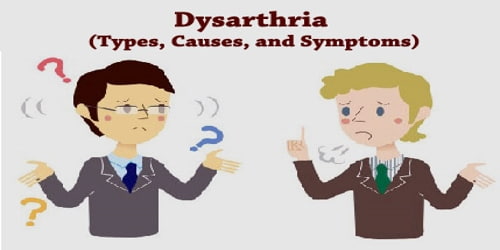 Definition: Dysarthria is a motor speech disorder that is a condition when the muscles that a person uses for speaking weaken or it becomes difficult to control those muscles. Dysarthria often is characterized by slurred or slow speech that can be difficult to understand. The term is from New Latin, dys- “dysfunctional, impaired” and arthr- “joint, vocal articulation”.

Any of the speech subsystems (respiration, phonation, resonance, prosody, and articulation) can be affected, leading to impairments in intelligibility, audibility, naturalness, and efficiency of vocal communication. Dysarthria that has progressed to a total loss of speech is referred to as anarthria.

Dysarthria is a commonly occurring speech problem that appears due to different types of neurological disorders from any form of injury to the nervous system or as a side-effect of certain medications. Such neurological disorders cause partial or complete facial paralysis leading to weak muscular movements in the throat or poor movement of the tongue.

Common causes of dysarthria include nervous systems (neurological) disorders such as stroke, brain injury, brain tumors, and conditions that cause facial paralysis or tongue or throat muscle weakness. Certain medications also can cause dysarthria.

Augmentative and alternative communication (AAC) devices that make coping with a dysarthria easier include speech synthesis and text-based telephones. These allow people who are unintelligible or may be in the later stages of a progressive illness, to continue to be able to communicate without the need for fully intelligible speech. Classifications of Dysarthria: Dysarthria is classified into different types depending on the types of symptoms shown by the people affected by dysarthria. The most common types of dysarthria are described below – Causes, Signs, and Symptoms of Dysarthria: There are many potential causes of dysarthria. Common conditions that may cause dysarthria to include the following:

Some medications, such as narcotics or sedatives, also can cause dysarthria.

Signs and symptoms of dysarthria vary, depending on the underlying cause and the type of dysarthria, and may include: