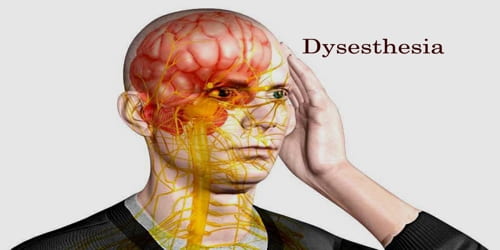 Definition: Dysesthesia is pain triggered by the central nervous system, commonly associated with multiple sclerosis (MS). Pain doesn’t always enter the discussion when talking about MS, but it’s actually a common symptom. The word ‘Dysesthesia’ (or dysaesthesia) comes from the Greek word “dys”, meaning “not normal” and “aesthesis”, which means “sensation” (abnormal sensation).

It often presents as pain but may also present as an inappropriate, but not discomforting, sensation. It is caused by lesions of the nervous system, peripheral or central, and it involves sensations, whether spontaneous or evoked, such as burning, wetness, itching, electric shock, and pins and needles. Dysesthesia can include sensations in any bodily tissue, including most often the mouth, scalp, skin, or legs.

It’s easy to confuse dysesthesia with paresthesia or hyperalgesia, both of which can also occur with MS. Paresthesia describes sensory symptoms such as numbness and tingling, “skin crawling,” or that “pins and needles” feeling. It’s distracting and uncomfortable, but not generally considered painful. Hyperalgesia is an exaggerated response to painful stimuli.

Types of Dysesthesia: There are different types of dysesthesia that each affects different parts of the body. Causes, Sign, Symptom of Dysesthesia: Dysesthesia is what’s called neuropathic or neurogenic pain. That means it comes from our nervous system. Although people feel the pain in their feet or skin, that isn’t where the problem is. People with MS form scar tissue, or lesions, in the brain and spine. These lesions interfere with signals between the brain and the rest of the body.

In the case of dysesthesia, impaired nerve firing can cause the brain to stimulate abnormal, uncomfortable sensations, ranging from a mild tingling sensation to sharp, stabbing pains. It Dysesthesia is commonly seen in diabetic patients and can be relieved by using creams containing capsaicin.

Dysesthesia may be caused by a thalamic stroke involving the ventral posterolateral (VPL) nucleus. It’s typically seen in Dejerine-Roussy syndrome with hemi-sensory loss and severe dysesthesia of the affected area.

Symptoms of dysesthesia vary between individuals, but most cases of the condition tend to cause similar symptoms that impact the skin, scalp, face, mouth, torso, arms and legs.

The most common symptoms associated with dysesthesia include:

Many cases of dysesthesia are caused by progressive conditions, meaning they become worse over time. Treatment of Dysesthesia: Treatment is different for everybody. Daily oral muscle physical therapy or the administration of antidepressants have been reported as an effective therapy for occlusal dysesthesia patients. Tooth grinding and the replacement or removal of all dental work should be avoided in patients with occlusal dysesthesia, despite the frequent requests for further surgery often made by these patients.

Medications used to treat dysesthesia include:

Some pain management strategies for dysesthesia don’t involve medicine. People may be able to change pain to a different feeling with warm or cold compresses or compression socks or gloves. Alternative therapies can also be part of an overall treatment plan for chronic pain.