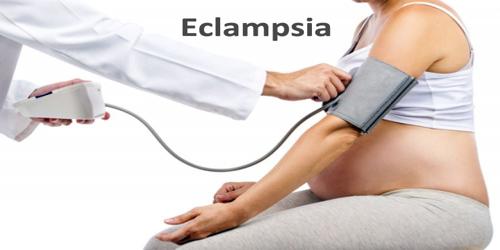 Eclampsia is a toxic condition of unknown cause that sometimes develops in the last three months of pregnancy, characterized by high blood pressure, abnormal weight gain and convulsions compare pre-eclampsia. It’s a rare but serious condition where high blood pressure results in seizures during pregnancy. Seizures are periods of disturbed brain activity that can cause episodes of staring, decreased alertness, and convulsions (violent shaking). Eclampsia affects about 1 in every 200 women with preeclampsia.

Complications include aspiration pneumonia, cerebral hemorrhage, kidney failure, and cardiac arrest. Pre-eclampsia and eclampsia are part of a larger group of conditions known as hypertensive disorders of pregnancy. The Greek noun “ἐκλαμψία”, eklampsía, denotes a “light burst”; metaphorically, in this context, “sudden occurrence.” The New Latin term first appeared in Johannes Varandaeus’ 1620 treatise on gynaecology Tractatus de affectibus Renum et Vesicae. The term toxemia of pregnancy is no longer recommended: placental toxins are not the cause of eclampsia occurrences, as previously believed.

The main feature of eclampsia is a seizure that is not linked to any pre-existing disorder. Women who already have an underlying vascular disorder such as diabetes, high blood pressure or kidney disease are at a greater risk of developing eclampsia and pre-eclampsia than women without these conditions. Other conditions that increase the risk include thrombophilic diseases such as antiphospholipid syndrome. In addition, women who are over 40 years of age or women with twin or multiple pregnancies are also at a greater risk of eclampsia. A family history of the condition can also increase the risk.

Pre-eclampsia is estimated to affect about 5% of deliveries while eclampsia affects about 1.4% of deliveries. In the developed world rates are about 1 in 2,000 deliveries due to improved medical care.

Eclampsia is a condition that causes a pregnant woman, usually previously diagnosed with preeclampsia (high blood pressure and protein in the urine), to develop seizures or coma. In some cases, seizures or coma may be the first recognizable sign that a pregnant woman has had preeclampsia. Eclampsia, like pre-eclampsia, tends to occur more commonly in first pregnancies and young mothers where it is thought that novel exposure to paternal antigens is involved. Risk factors for developing preeclampsia include: The most common sign of pre-eclampsia is elevated blood pressure and is also found in eclampsia. Again, the patient may be unaware that she is hypertensive. The most common symptom of eclampsia is seizures, or convulsions. Similar to pre-eclampsia, other changes and symptoms may be present and vary according to the organ system or systems that are involved. These changes can affect the mother, the baby, or more commonly both mother and baby together. A common belief is that the risk of eclampsia rises as blood pressure increases above 160/110 mm Hg. The following are common symptoms of eclampsia:

Diagnosis, Treatment and Prevention of Eclampsia

If any of the previously mentioned symptoms are experienced, a health-care professional should be notified immediately.  If home blood pressure monitoring is being performed, the readings, if elevated, should be reported to the doctor.  It is likely that a visit to the doctor’s office or the hospital may be necessary. There is no cure to treat preeclampsia or eclampsia. The only cure is to deliver the baby. The doctor will determine when this should be done based on the severity of symptoms and the gestation of the baby. If the preeclampsia is mild, the doctor may prescribe: