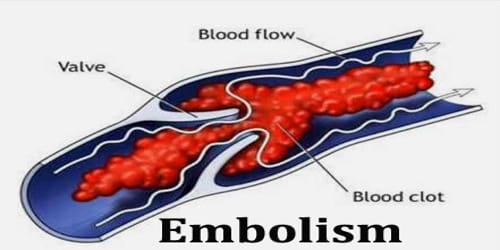 Definition: An embolism is the lodging of an embolus, a blockage-causing piece of material, inside a blood vessel. The embolus may be a blood clot (thrombus), a fat globule (fat embolism), a bubble of air or other gas (gas embolism), or foreign material. Embolisms are most commonly some form of the blood clot, but there are cases where other objects are able to make their way into the bloodstream as well.

Two of the most serious conditions caused by an embolism are:

There are several types of embolism:

An embolism is usually a pathological event, i.e., accompanying illness or injury. Sometimes it is created intentionally for a therapeutic reason, such as to stop bleeding or to kill a cancerous tumour by stopping its blood supply. Such therapy is called embolization.

Risk Factors, Causes and Symptoms of Embolism: Embolisms share many risk factors with heart disease, such as age and genetics. Smokers, people with high blood pressure and those with high-cholesterol diets are also at increased risk.

Embolisms can also form as a result of more singular occurrences, however. Tumours or fat from bone marrow can detach from their original homes and become emboli, often clogging up areas far from where they originated within the bloodstream. Pockets of air will occasionally form within blood vessels and act as emboli of their own, a slightly more common occurrence for underwater divers.

The primary cause of most pulmonary embolisms is deep vein thrombosis (DVT). This is a condition in which the veins of the legs develop clots. Natural agents in the blood often dissolve small clots without causing any effects of blockage. Some clots are too big to dissolve and are big enough to block major blood vessels in the lungs or in the brain.

The symptoms of an embolism depend on the particular type of embolism involved. The main symptoms of a stroke are drooping of the face, weakness or numbness in one arm, and slurred speech or an inability to talk at all.

However, symptoms can include:

Diagnosis, Treatment and Prevention: There are several tests that may be done to diagnose a pulmonary embolism. In addition to a chest X-ray, a ventilation-perfusion (V/Q) scan may be performed to see if anything is blocking blood flow through the lungs. Other tests include CT scan or pulmonary angiography. For strokes, brain scans, angiography, or Doppler ultrasound studies may be used to detect arteries blocked by a blood clot.

For embolisms caused by blood clots, anticoagulants (medicines which stop blood from clotting) are the primary treatment method. They’re often used alongside another type of medication called thrombolytics, which help dissolve clots. Anticoagulant medication, such as warfarin, heparin and low-dose aspirin, can help make the blood less sticky and stop further clots forming.

A surgical procedure called an embolectomy is sometimes carried out to remove an obstruction. During the operation, the surgeon makes a cut in the affected artery so that the foreign body causing the blockage can be sucked out in a process known as aspiration.

The most effective way to prevent pulmonary embolism is to prevent DVTs from forming or starting to move in the blood vessels. Anticoagulants can also be given to people with DVT to prevent the condition. They can also protect against stroke.